Over the last year we’ve seen Panasonic replace the G3 with the G5 and introduce the GH3 as its flagship CSC. This suggests the company may be looking at refreshing other areas of its CSC line-up. The Panasonic Lumix GF5 is less than a year old so we’re not anticipating a replacement of this model just yet; however the GX1 is now over a year old after it joined the G-series in November 2011. 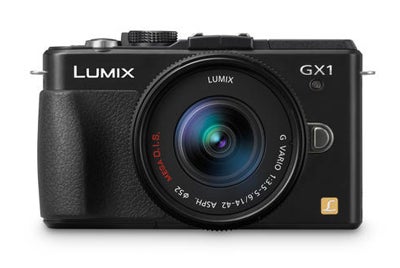 The Panasonic Lumix GX1 is expected to be replaced in 2013. Rumours suggest Panasonic will be launching compacts at CES 2013, meaning we may have to wait slightly longer for a new G-series compact system camera to arrive.

Presumably if Panasonic were to refresh the GX1, the successor would be the Panasonic Lumix GX2? There’s talk that it could inherit a more responsive touchscreen, such as the one that made the Lumix GH3 such a pleasure to operate. There’s speculation the design could also be altered to make it even more comfortable to hold in the hand, but with the GF5 already having petite dimensions we’d expect it to be no smaller than what we’ve seen before and suitable for slotting into a jacket pocket or small travel bag. Don’t get too excited though. Panasonic’s CEO, Mr Kazuhiro Tsuga, who will present a keynote on 8th January at the CES show is expected to talk about camcorders, TVs and compact cameras. This suggests a new CSC will arrive slightly later at the CP+ show in Japan that’s held in late January.

Will this be the year that Panasonic jumps on the Wi-Fi wagon and starts to introduce wireless connectivity into more of its compacts? Who knows? Perhaps the company will make its own attempt at an Android camera that’s capable of posting directly to social media and supports a series of Panasonic enhancement apps? We’ll bring you the news on the 8th January as it arrives.