Your Guide to? HDR – Shooting HDR

The key to shooting a good HDR image is to keep the camera as steady as possible between shots. While a steady hand may suffice for a small number of shots, and some HDR software allows for camera movement in processing, the safest option is to employ a sturdy tripod.

One of the main goals in shooting HDR is capturing as much detail from a scene as possible. As a result, it’s best practice to always shoot Raw files to skip the camera’s natural compression.

Don’t forget that HDR is not a quick fix or magic technique to make any photograph great; you still have to remember the basics such as composition. Don’t be afraid to feature more elements that may benefit from the HDR treatment, however, such as the sky in a landscape.

To get an idea of the range of exposures you need to bracket, it’s an idea to meter both the light and the dark areas of the scene. Once you’ve got readings, you can decide how many exposures you want between the two readings.

Finally, either set your camera to bracket mode and shoot the desired shots, or bracket images manually. Be warned, though, to keep the camera on aperture priority, or manual, as a default. Any shift in aperture will affect the depth of field through the image. WDC 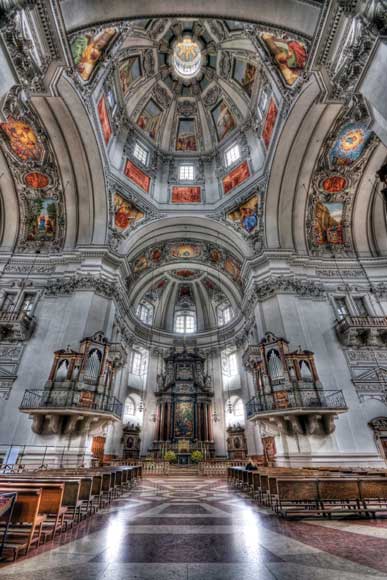 Know Before You Go!

Use a sturdy tripod

If you’re looking to bracket a number of exposures, then you’ll need to have as little camera movement as possible. Any movement will make it harder to produce a clean HDR image, so as a result a sturdy tripod is essential.

There is a school of thought that says the more exposures you combine, the better the image will be. However, this isn’t technically true, so experiment with just what you can achieve.

If you’re wondering whether or not your image could benefit from HDR processing, the histogram could be a good reference. If there’s clipping at either end, you’re missing some detail in the shot and should consider HDR.

Most HDR photography considers either landscapes or interiors as the main focus. However, the technique can be applied to unconventional subjects, such as portraits, by either getting your subject to sit as still as possible or use the ‘cheat’ method.

Now while this may seem simple, it’s anything but. In fact, it’s possible that the perception of the technique as one of the simpler forms of photography is exactly why there are so many bad examples of the technique. Complications present themselves in both the capture and the processing stage of creating an HDR image. For example, if you’re trying to capture a scene where features are moving, such as rippling water or people moving through the frame, then you’re likely to suffer from ‘ghosting’, much the same as if there is any movement of the camera between shots. If you manage to keep the latter fixed – that is, you minimise the movement of the camera  – then it is possible to integrate movement into the image in much the same way you would a long exposure image.

If you manage to get all the variables nailed at the capture stage, there are still potential pitfalls when it comes to post-processing. The main stumbling block normally involves the sheer range of controls one has over the tonemapped image. A host of foreign labels and names present themselves, and then can take some time to master.

Wherever possible, always try to shoot Raw. The main reason for shooting Raw is to maximise data capture, and whenever you capture an image in JPEG format, the camera will automatically apply some kind of compression and processing to the image, and you will as a result lose some data.

While it’s possible to counter in post-processing, it’s difficult and not always completely satisfactory. The only real way to avoid ghosting is to avoid movement full stop, so try to avoid scenes with water or moving people. When this is the case you can either attempt to tackle the problem in post-production, or simply ‘cheat’ by processing from a single Raw file.