Renaming and reinforcing ownership of your images

In the many years that I’ve been reviewing the readers’ photographs sent in to What Digital Camera it has become clear that few, if any of our readers, have been using logical methods to rename their image files. We often see photographs submitted as 01.jpg or with a descriptive file name like beautiful-sunset.tif. The problem of course is that there are lots of images out there called 01.jpg or 0001.jpg even, and once you have renamed one photograph beautiful-sunset.tif, what do you call a subsequent sunset image? even_more_beautiful-sunset.tif? It won’t be long before you run out of options! I know a lot of people like to rename this way as they believe this can help them identify their images. To some extent this method can be useful and I do this myself when writing a book since it is easier to place images on the page when you are searching primarily by filename. But I only rename this way when working with files that are derivatives of the masters, and am very careful about how the original master files are named.

In the old days of computing the Windows DOS system only permitted 8 characters be used for the file name plus 3 further characters after the dot for the file format extension name. Because of the way camera cards are formatted, digital cameras still use the 8.3 naming system (i.e. 1W8A0265.CR2) to name the individual camera capture files. Meanwhile, Macintosh users have always had the freedom to write a mini essay when naming their files, should they wish. And now of course, the same applies to all later Windows operating systems. But just because you can, doesn’t mean you should, as there is a lot to be said for the simplicity of the Windows DOS file naming system.

When you buy a new camera, the on board software will usually have allocated a 4-character alpha/digit code (such as 1W8A) followed by a 4-digit number where the file number counter starts from zero. This allows you to shoot up to 9,999 photographs before the counter automatically resets to zero and updates the prefix section to some new 4-character code so that there is no overlap in the subsequent file naming. Basically, all cameras are clever enough to rename the file captures for you, automatically allocating filenames that will always be unique to your image database and quite possibly everyone elses. For example, a Google search for beautiful-sunset.jpg revealed 250 matches, while a search for ‘1W8A0265.jpg’ images produced none. Therefore, if you get in the habit of not renaming your images you’ll end up with a library of photographs all uniquely named and no overlapping file name conflicts.

Reinforcing ownership of the images 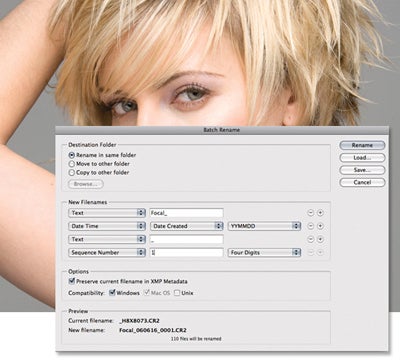 However, when it comes to client job work I shoot, everything is renamed using a standard naming convention where an abbreviated client name is followed by the capture date (using the YYMMDD format), followed by a 4 digit serial number (see Figure 1 below). There are several reasons for adopting this approach. By choosing a regular renaming scheme, it can become easier to identify files by client name and date (it is important to be consistent in the client naming of course). Four digits is usually enough to cover all the numbers of shots that I might shoot for a client in any year. I will start from zero for the first shoot of the year and keep the numbers running consecutively for all subsequent shoots with that client. It is important to carry out such renaming as soon as the files are brought into the computer. So, if a client selects a particular photo via the screen, the name that’s referenced is one that stays with the file forever. By including the client name in the renaming scheme this reinforces ‘ownership’ of the file name. One of the problems I found in the early days of shooting digital was that if you didn’t rename the images, clients would often rename them for you! There was one in particular who would ask for prints to be made from ‘hairshine-blonde.tif’ or some other descriptive name that had been applied to the original retouched images. It all got very complicated trying to work out which exact shots they were talking about!

This is just one way of renaming. In The DAM book, Peter Krogh suggests renaming everything with your name first rather than the client’s. This kind of naming scheme immediately makes it clear who is the copyright holder before the image is opened. Peter also suggests appending the embedded filename instead of allocating a four-digit serial. The reason being that if all your jobs are renamed starting from 0001, your files will all end up renamed within the same low number range. If you use the embedded numbers, very few of the filenames will end up being identical. Hence, if a client can only give you the last four digits you should be able to do a filename search and figure out which image it is they are referring to.

Figure 1. This shows the Bridge Batch Rename dialog, which is available from the Bridge Tools menu. This particular example shows how I might go about renaming a selection of photographs as described in the main text.

Reverting to the original file name 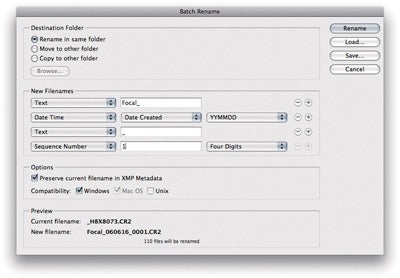 In this image you will also notice also that the ‘Preserve current filename in XMP Metadata’ option is checked. This option allows you to preserve the original file name in the file’s XMP metadata after you have renamed it. This is a very useful thing to do since it can help you easily recover from a botched renaming situation.

In summary, if you are uncertain how to rename your files effectively, it is often best to leave the file names as assigned by the camera. If you do choose to rename, then try to be systematic and consistent in whatever approach you adopt.