Having just defined the F-stop it is worth highlighting the use of Waterhouse Stops, which were both an early attempt and a very precise way to vary the aperture of a lens.

Waterhouse Stops date from 1858 and as such were used during the earliest days of photography. They bear the name of John Waterhouse, who was also very active in the field of early photographic chemistry and who suggested the use of eosin dyes to make films, or rather collodion plates, sensitive to yellow and yellow/green light. (It is easy to forget the first films were not only monochrome but also they were initially sensitive only to blue and UV light.) That said, it seems very likely that the same idea was also hit upon by fellow Englishman H R Smyth, maybe even a couple of years earlier according to correspondence that appeared in the Journal of the Photographic Society of London in 1859.

Waterhouse Stops were nothing more than thin sheets of metal with a hole punched in the middle. The accompanying lens had a small slot cut into the side of its barrel through which one of these thin sheets of metal could be inserted. If there had been no hole punched in the sheet then the metal would have blocked the path of the light entirely: therefore, by using sheets with different hole-diameters it was possible to vary amount of light that was transmitted. This in turn allowed the photographer to achieve the correct exposure conditions. 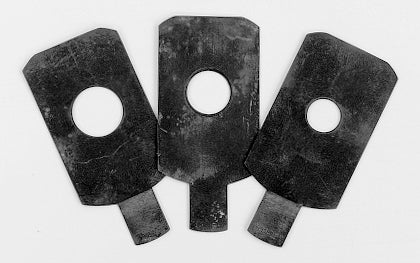 The sheets of metal were not numbered in any standardised manner so there is no direct numerical relationship between Waterhouse Stops of old and modern F-stops.

Waterhouse Stops did not introduce the idea of “stopping down” a lens but rather allowed this to be done more conveniently than before, when the only method had been to unscrew the lens and insert a new aperture sheet before screwing the lens back together again. A more sophisticated variation employed a sheet that had several different holes punched into it so that the metal could be either slid or rotated to bring different apertures into the light path.

All of this undoubtedly sounds highly esoteric in the modern age but Waterhouse Stops persisted until fairly recently through the use of non-circular apertures in the pre-digital publishing industry for making half-tone blocks. In addition, there is a modern camera lens that still uses Waterhouse Stops today – the flexible, selective-focus, Lensbaby.

A very big reason in favour of using Waterhouse Stops is the ability to vary not only the size but also the shape of the aperture in order to create interesting creative effects, some of which appear on the Lensbaby website at www.lensbaby.com/lenses.php. Fortunately, you can explore such effects with a conventional modern lens without having to delve inside it. I’ll return to this possibility in a future column.

If you want to be alerted when new ‘blogs are posted then you can subscribe to my Twitter feed (Jon_Tarrant) safe in the knowledge that you’ll only get messages once a week or so, mostly just to announce when my latest WDC ‘blog has gone live.