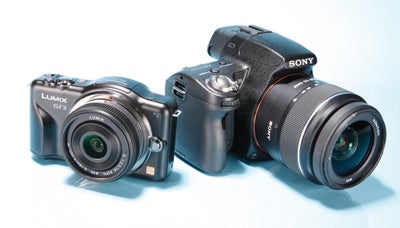 This
was the most hotly contended category this year – choosing our winning
Compact System Camera from the mass of top-quality options wasn’t taken
lightly. We voted, we argued, and continued in that cycle for quite some
time. But one thing was clear: that the Lumix GF3 was a firm favourite
that kept on surfacing to the top of the pile. Not because it produces
the best image quality (as, frankly, there are contenders that beat it
in this department), but because it’s the camera that epitomises the CSC
category. It’s über-small, easy to use, affordable, has a good
lens-to-body size ratio, super-fast autofocus and, above all, it’s the
one that all of us WDC folk would choose to take away on a short weekend
or to back up the DSLR on holiday. A bit of a people’s champion, if you
will.

Sony’s
grip on the DSLR and SLT market was further strengthened this year, and
the Alpha 35 is a prime example as to why. Although this model may be
‘entry-level’ in terms of Sony’s lineup, it’s one of those cameras that
grabs far higher-end features and squeezes them into this sub-£400 body.
It’s an undeniable bargain to pick up a camera that steps up to the
plate and outdoes even pricier peers. While the electronic viewfinder
integral to the A35’s build may not be to everyone’s tastes, we were
taken aback by the sheer quality of the camera’s final images, the fast
continuous focus, great movie mode and rapid burst speed. This one’s a
crowd-pleaser and the camera to put SLT firmly on the map. DSLRs, watch
your backs…