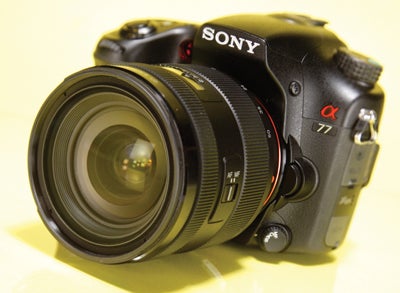 Product of the Year

It was this time last year that we awarded Sony’s SLT (Single Lens Translucent) system our Innovation of the Year Award 2010. With not one but two SLT models making it into this year’s WDC Awards it’s fair to say we’ve been suitably impressed.
But the Sony A77, which has been talk of the rumour mill for a long time now, is in a different class. It’s an all-guns-blazing release that’s managed to successfully balance out the hype by delivering on its promises in abundance. Its 2.5-million-dot OLED electronic viewfinder outshines the competition by quite a margin – an area crucial to the success of the category. Add a 24.3MP sensor, 12fps shooting, incredible continuous autofocus that also works during 1080p movie capture and finish off with a weather-sealed body, and there’s little that the A77 can’t do.
There’s been talk of SLT being the death of DSLR and, based on the A77’s performance, that may yet be the case. Sony’s latest is a triumph and a worthy winner of our Product of the Year 2011.