When Nikon’s D700 was released it had little by way of competition. Canon’s original 5D was perhaps its closest rival, and until the MK II’s launch the two were naturally compared, but three years of technological advancement had led Nikon to produce a model that could offer so much more. Dust reduction, live view and high-resolution LCD screens had become the norm, and maximum sensitivities were increasing as processing and sensor technologies had developed. The arrival of Sony’s a900 only reinforced what consumers should be expecting as standard, so it’s just as well that Canon did finally release a model fit for the modern era. Of course, the fallout of this is that while all three are excellent in their own right, inevitably, they’re all different.

As such, a comparison between the three can only conclude so much. A professional choosing one of these models will almost certainly be governed by whether a 12MP sensor is enough for their requirements. If not, the other two cameras offer a cheaper and more portable alternative to medium format systems, and are more suited to those applications where detail is likely to be scrutinised – fashion, studio and landscapes would be three such areas.

For reasons I can’t put my finger on, I’ve had the most fun using the Sony a900 (particularly with the excellent Carl Zeiss 24-70mm lens), and the detail it is capable of resolving is incredible. Obviously Sony has had quite a leg up from Konica Minolta to get this far in the DSLR market so quickly, but to produce a model that can more or less comfortably rival the other two is still a significant acomplishment. As for the Nikon D700, I’ve consistently relied upon its responsiveness and performance in a variety of conditions, and the spatial advantage of its photosites makes it more tolerant to poor lighting.

And while Canon may have initially lost some sales to the D700, the wait was clearly worth it to bring together the 5D Mark II. Its high-resolution images and obligatory professional trappings make it the most well-rounded camera out of the three, and its video mode signals a new era for the working professional. 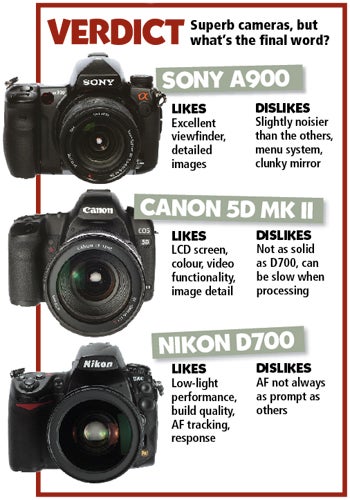 So which one is right for you? The answer will largely depend on what
you’re using it for. If you shoot landscapes or work in the studio,
with the camera on a tripod, rarely venture above ISO 400, and want the
highest possible resolution, the Sony Alpha 900 would be your choice.

For photojournalism, sport, wildlife, concerts and other types of
photography where you may be called upon to shoot moving subjects, in
less than ideal light conditions, then there is no finer camera than
the Nikon D700 (with the possible exception of the much more expensive
Nikon D3 from which its technology is derived).

If you want the best of
both worlds – the high resolution of the Sony and the versatility of
the Nikon, the Canon EOS 5D Mk.II offers a good compromise between the
two – and with HD video to boot.

In summary though, these are all
exceptional cameras and I find it hard to believe anyone could be
genuinely dissatisfied by any one of them.