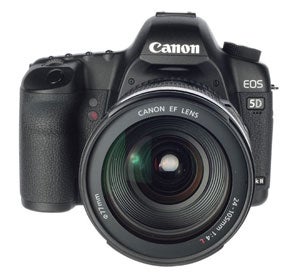 All three cameras are geared towards the enthusiast/professional markets, each carrying with it an impressive specification sheet. At 12.1MP, the Nikon D700 features the lowest pixel count out of the three, followed by the Canon EOS 5D Mark II at 21.1MP and finally the Sony a900 at 24.6MP, in each case on a full-frame CMOS sensor. As we expect, each sensor has been fitted with a dust-reducing vibratory mechanism to help keep the sensor area clean, though only the Sony a900 further uses this technology for image stabilisation.

For the other two cameras image stabilisation is offered via the lens, where the appropriate lens group shifts to counter any camera shake. Many Canon and Nikon lenses now feature image stabilisation – dubbed IS on Canon’s optics and VR on Nikon’s – though these systems are expensive to manufacture, which translates to them carrying a price premium. Both manufacturers do, however, claim their system is the most effective as it’s optimised for the lens and not the body, though Sony’s offers the advantage of working with almost every mounted lens. 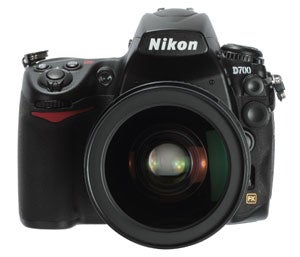 The Canon EOS 5D Mark II is unique in being the only model to offer video recording. Video may be captured at a 1920 x 1080 pixel resolution (full HD) at a frame rate of 30fps, and up to a maximum 12 minutes, or you can extend your shooting time to 24 minutes by switching to standard VGA definition of 640 x 480 pixels. Nikon’s D700 may not offer video recording, but it matches the 5D Mark II in supporting live view, which comprises two autofocus modes – tripod and handheld – as well as manual focusing. The a900 offers neither live view nor video, though it does feature an Intelligent Preview mode, which takes a preview image from which any adjustments to white balance, exposure and so on may be viewed and changed, prior to the real image being taken.

The three cameras are better matched when it comes to their LCD screens, in that each is a 3in display with a 920,000-dot resolution, offering 100% coverage of the scene and a wide 170° viewing angle. The device found on the Canon EOS 5D Mark II is complemented by a sensor which monitors shooting conditions, adjusting the LCD’s brightness accordingly, though manual adjustment is possible on all three models. 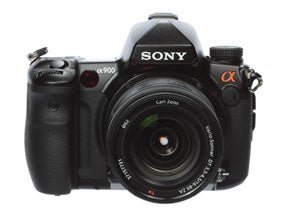 Unsurprisingly, none of the three cameras offers scene-based exposure presets, with their control centred instead around the PASM (Program, Aperture Priority, Shutter Priority and Manual) options. Each camera also differs slightly in the control it provides for storing and accessing custom settings; the EOS 5D Mark II provides three user-defined custom settings via the mode dial, as well as a My Menu option, with the a900 only providing the former and the D700 the latter. The EOS 5D Mark II also features a Creative Auto mode, which allows the user to make adjustments in a user-friendly way (such as blurring the background, which forces the camera to change the aperture), though its status seems somewhat redundant on a model like the 5D Mark II. Having also featured on the recent EOS 50D and EOS 500D models, it’s likely this will trickle down towards the lower end of the EOS DSLR spectrum in future models.

Dynamic range optimisation, which has steadily crept into DSLRs over the past few years, features on all three of these models. Nikon’s comes in the form of Active D-Lighting, which is available in different intensities as well as on an automated setting. Canon has a two-pronged approach, with the Highlight Tone Priority setting and Auto Lighting Optimiser. The former, set to either on or off, regains highlight detail from blown out areas, while the latter benefits both shadow and highlight detail. As with Active D-Lighting users have control over how greatly this is applied, though again, this may also be left to auto. The a900 features perhaps the most comprehensive system, in that there are standard and advanced auto options, together with further settings that let you fine-tune this to one of five levels. Although it may be confusing as to which setting is the most appropriate in a given situation, the Intelligent Preview function allows you to view the effect of each of the seven settings to find the best one.

Each camera’s focusing patterns are largely based upon previously seen configurations. Canon has carried over the nine-point AF system from the original 5D, with an additional six ‘invisible’ points within the central spot-metering circle, while the DIGIC 4 processor is said to improve the speed and accuracy of AF calculations over the model’s predecessor. The a900, meanwhile, sees nine standard points complemented by 10 assisting points, the latter activating when the Wide Area AF mode is called upon. Overwhelming both these, the D700 features a 51-point system, which squeezes in 15 cross-type sensors in its centre, and a further 36 towards the peripheries of the frame.

In terms of output and connections, each camera provides a port for flash synchronisation, external remote controls and HDMI connectivity, and recording in each case takes place onto either CompactFlash or UDMA memory. The a900 further provides a slot for Sony’s proprietary Memory Stick Duo format.