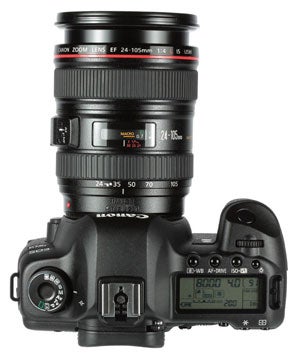 Despite the Canon EOS 5D Mark II and Nikon D700 not technically being at the top of their range, both have been designed and constructed for professional use, as has the flagship a900. Each camera has been sealed to keep out water and dust from where it may incur, though despite the promise of weatherproofing, there was one occasion with the EOS 5D Mark II (right) where some rain managed to make its way into the top-plate LCD. Although this dried out within a few hours, it still leads me to believe that the camera isn’t perhaps as tightly sealed as the other two.

None of the three cameras creaks or shows any signs of weakness when subjected to a firm hold, while the grip, back plate and sides of each body have been rubberised for both comfort and security. Internally, the shutter mechanisms for both the D700 and 5D Mark II have been tested to 150,000 cycles, with the a900 slightly behind at 100,000. 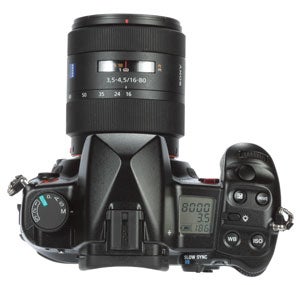 On the grip side of each camera’s top-plate lies an LCD screen, whose main purpose is to display exposure information. The four extra buttons that the Sony A900 (left) has squeezed into this space means that this display is much smaller than the others, and consequently is only able to display basic information at default, though any changes you make to shooting parameters such as ISO and white balance are indicated on this screen. These aforementioned buttons – which concern drive mode, exposure compensation, white balance and ISO – aren’t all easy to operate quickly without straining your finger, particularly the latter two, which are furthest towards the back of the camera. Another consequence of the Sony’s smaller LCD monitor is that in some cases it only allows for somewhat obscure labelling of certain menu options: continuous shooting at low speed is simply stated as ‘oooL’, for example.

The Canon and Nikon offer a similar concept of menu- and body-based controls, though on both I find it easier and faster to change settings via the dedicated buttons. Canon’s long-standing arrangement of pairing up two key functions per button on the top-plate makes changing these with one hand easy, and as with the other two cameras changes to exposure, sensitivity and so on are indicated in the viewfinder, too. You generally need two hands to do the same on the D700, as the buttons for image quality, white balance and sensitivity are located on the other side of the camera to the two command dials, though neither of the three systems is unworkable. 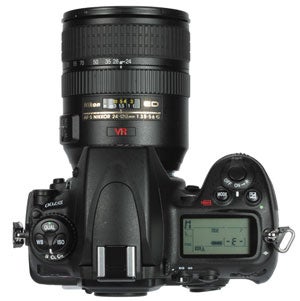 The menus, however, are a little trickier to navigate on the a900, mainly because the same black, orange and white colour palette is used throughout the various tabs and options. Even after extended periods of use, I would often find myself needing to carefully look through each tab to make sure I didn’t go past what I was looking for. Admittedly this may seem a trivial concern, but a simple thing such as menu colour coding ultimately makes a camera easier and quicker to operate. In any case, the a900 does redeem itself by offering a clear graphic user interface panel from which to adjust key settings, as does the Canon EOS 5D Mark II. (Right: the Nikon D700)