Slotting into the company’s EOS for beginners range, the 100D positions itself between the entry-level EOS 1100D and EOS 600D and 700D. Offering impressive features within a camera of this size suggests that cheaper DSLRs are starting to offer more to tempt people away from choosing compact system cameras. Let’s find out if the Canon EOS 100D sets a new standard in the DSLR market. 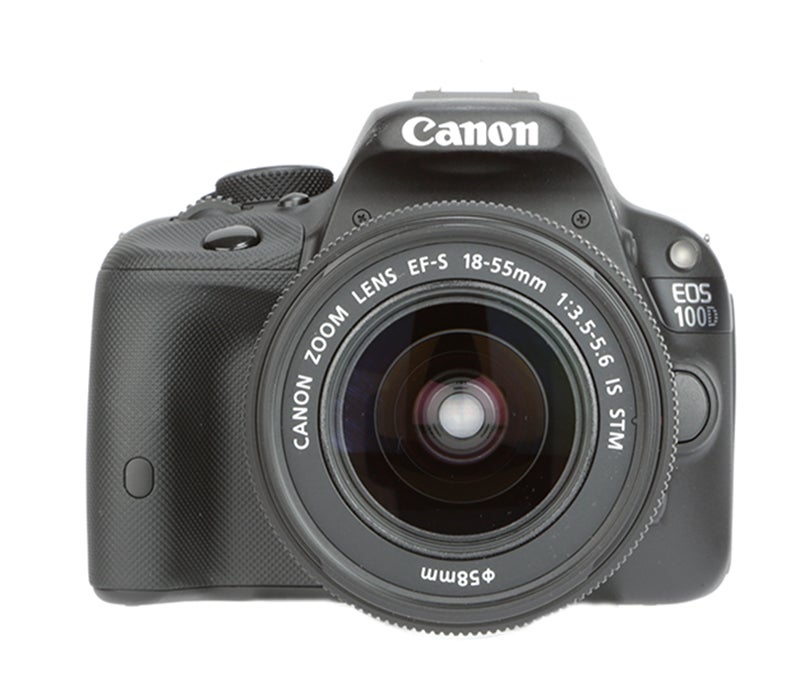 The Canon EOS 100D may be petite, but don’t get the impression that features have been stripped out to make the size it is. For a start, the 100D shares the same resolution output as the EOS 600D and EOS 700D, though the 18MP APS-C sized Hybrid AF II CMOS sensor has been redesigned with a smaller and thinner sensor unit. This delivers an ISO range of 100-12,800 and is extendable to 25,600 in the H setting when the ISO expansion is switched on within the custom settings.

The Hybrid AF II CMOS sensor also supports built-in phase-detect AF pixels for continuous autofocus when recording HD video, which the Canon EOS 100D captures at a variety of frame rates that include 30,25 or 24fps. Alternatively, there is also the option to record movies at 50fps(1280×720) and a 3.5mm mic port is located at the side above the remote port.

The miniaturisation of a new drive system, combined with a denser component layout, contributes to a reduction in the Canon EOS 100D’s main board size. In spite of this it still manages to cram in a DIGIC 5 image processor that enables the camera to shoot a continuous burst at up to 4fps, with 28 consecutive JPEGs or 7 Raw images claimed of being recorded.

To ensure it’s compatible for those looking at the camera as an upgrade option, or photographers who’d like to expand their system, the EOS 100D retains Canon’s EF-S lens mount and can be used with both EF and EF-S lenses. 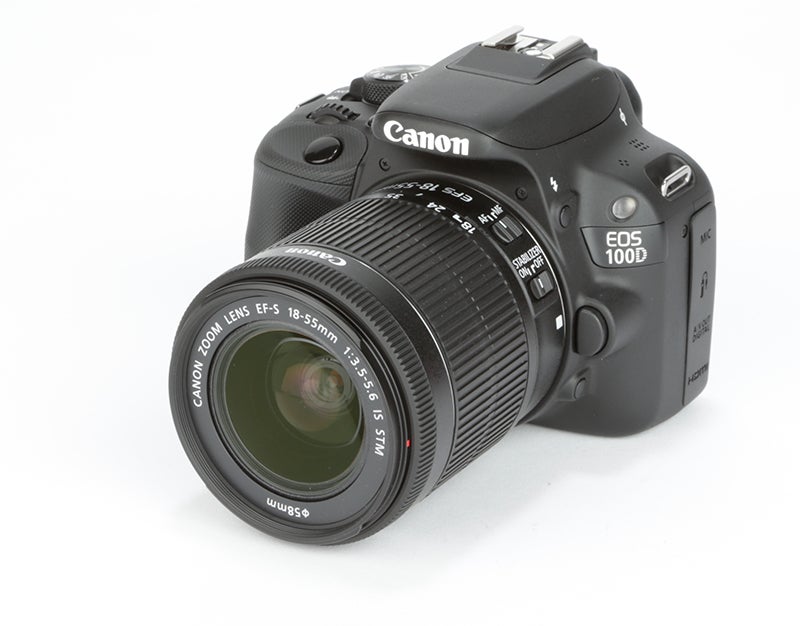 For stills, the EOS 100D features the tried and tested 9-point array of AF points in a diamond formation, with one cross type AF point in the centre. AF point selection can be set to automatic or manual, with AI focus, One Shot and AI servo modes available from the 100D’s quick menu display after touching the Q Set button at the rear.

For metering, the 100D adopts the TTL full aperture metering, 63-zone SPC metering system that has impressed us before in other DSLRs such as the Canon EOS 7D. The playback zoom out button doubles up as the AE lock button when shooting and exposure compensation is provided up to +/-5EV in 1/3 or ½ stop increments.

Turning to the rear of the camera, the EOS 100D’s optical viewfinder makes a refreshing change to the electronic viewfinders we’re so commonly used to seeing on cameras of this size. Coverage isn’t the full 100%, but approximately 95% with a 0.87x magnification. Dioptre correction (-3 to +1 m-1) is supported, as is a depth of field preview button that lies directly beneath the lens release.

Below the viewfinder is a 3in, clear view II TFT touch screen, which boasts a 1040k-dot resolution – a significant improvement on the 230k-dot screen as previously seen on the Canon EOS 1100D. The Canon EOS 100D’s screen is similar to that of the EOS 700D, other than it’s not the Vari-angle type and remains fixed and cannot be pulled out or swiveled. 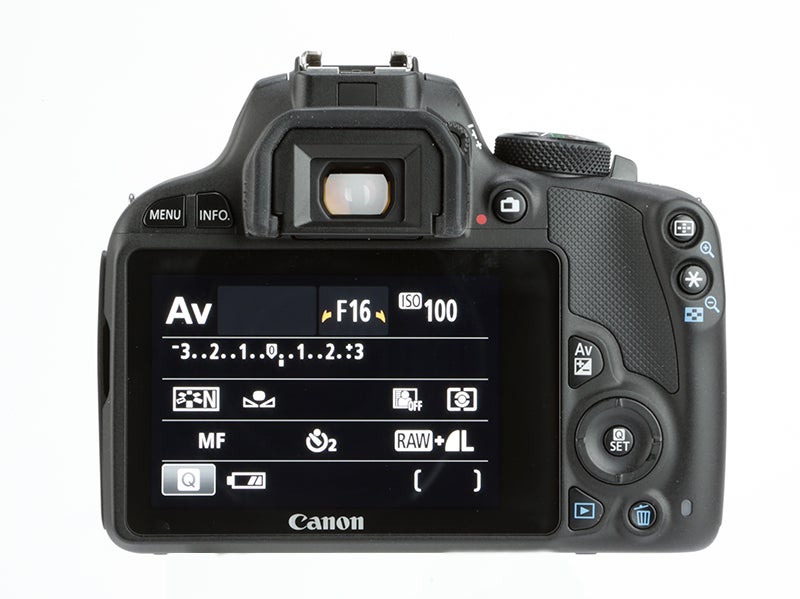 The built-in flash is handy for the times when you’d like to use a bit of fill-in flash and comes with a guide number of 13. Alternatively the hot shoe is ready to accept Canon EX series speedlights such as the Canon 270EX II and provides wireless multi-flash support.

Beside the Canon EOS 100D’s small Li-ion LP-E8 battery (claimed to be good for 440 shots) lies a SD card slot ready to accept SD,SDHC or SDXC (UHS-I) media. Unlike other Canon DSLRs however, such as the EOS 6D, the EOS 100D lacks any form of wireless connectivity, meaning those who’d like to transfer their shots from the camera to a smartphone or tablet will have to do so via the more conventional way of first uploading them to a computer.