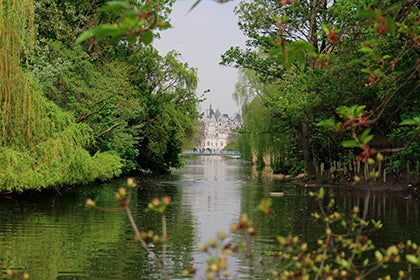 Adopting the same 63-zone SPC metering system as used on other Canon EOS DSLRs, the EOS 100D puts in a similar tone and exposure performance as produced by the EOS 600D, 650D and 700D. The camera’s metering system can be trusted to record scenes faithfully and during our extensive testing we experienced no apparent signs of the camera underexposing or overexposing.

For those who’d like to retain as much detail as possible in highlight and shadowed areas, there’s an Auto Lighting Optimizer available, which can be switched off completely or set to low, standard or high. As we discovered, the results aren’t too dissimilar from what you’d expect to record with the camera set to HDR backlight control from the scene settings.

Colours straight from the 100D are just as you’d expect – neutral with no sign of any colour cast. Set to Auto white balance, the camera’s white balance system is capable of interpreting colour temperature very well, though it does have a tendency to lean towards cooler and more neutral tones.

To give our portraits slightly more warmth, we opted to apply a low opacity-warming filter in Photoshop, but this of course was our personal preference and others may like the way the auto white balance system removes excess warmth from skin tones automatically. Either way, users of the EOS 100D won’t be disappointed by the Colour and White Balance performance.

The 18MP sensor within the Canon EOS 100D resolves excellent detail, giving you the option to crop in tightly without the dread of image quality degrading. A close inspection of the Canon EOS 100D’s Raw files after shooting our resolution chart revealed the sensor is capable of recording 30 horizontal lines per millimeter at ISO 100, which is a very respectable performance.

At higher sensitivity settings images do become softer and to resolve the most detail from the chip you’ll want to ensure your shoot in the Raw format or alternatively shoot Raw&JPEG.

The 100D’s ISO performance at high sensitivity settings is comparable to the Canon EOS 700D. Clean, noise-free images are produced between ISO 100 and ISO 800. At ISO 1600, colour noise is visible at close proximity in shadowed areas, however this can be quickly removed in Camera Raw by increasing the value of the Colour slider from beneath the detail tab to a value of 30.

ISO 3200 and 6400 are useable too, but to counteract the effect of luminance and colour noise creeping in, you’ll be required to apply some noise reduction using the noise reduction sliders in Camera Raw. ISO 6400 is the limit at which we’d happily push the sensitivity to on a frequent basis. At ISO 12,800 softness is recognizable without zooming into images, so we’d advise to stay clear of the highest two sensitivity settings for the best results in low-light situations. 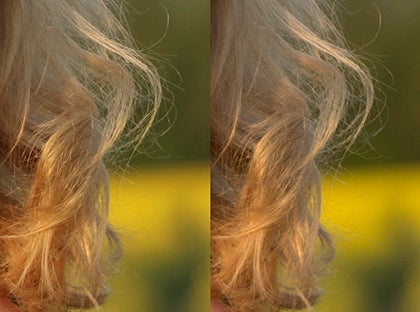 Inspecting JPEGs alongside Raw files indicates the former has a slight boost in contrast and saturation, which is most noticeable in the warm tones of images. The in-camera processing and sharpening that’s applied to JPEGs isn’t overly aggressive, but under close inspection it becomes more noticeable, especially when you compare highly detailed areas of an image at 100%, such as hair strands against a blurred background as shown below in the example.

Noise reduction in JPEG images does tend to smooth out detail at higher sensitivities, but it does a good job of reducing the colour noise that’s more obvious in Raw files unless the colour slider is used within Camera Raw.

As mentioned previously, the 18-55mm f/3.5-5.6 IS STM operates silently and provides a smooth autofocus operation for video. Optically, you can expect the kit lens to produce chromatic aberrations along edges where there’s a high contrast between highlights and shadows, while vignetting is also obvious when the aperture is fully opened, however you’ll find this starts to disperse at the corner of images when the aperture is closed down beyond f/5.6.