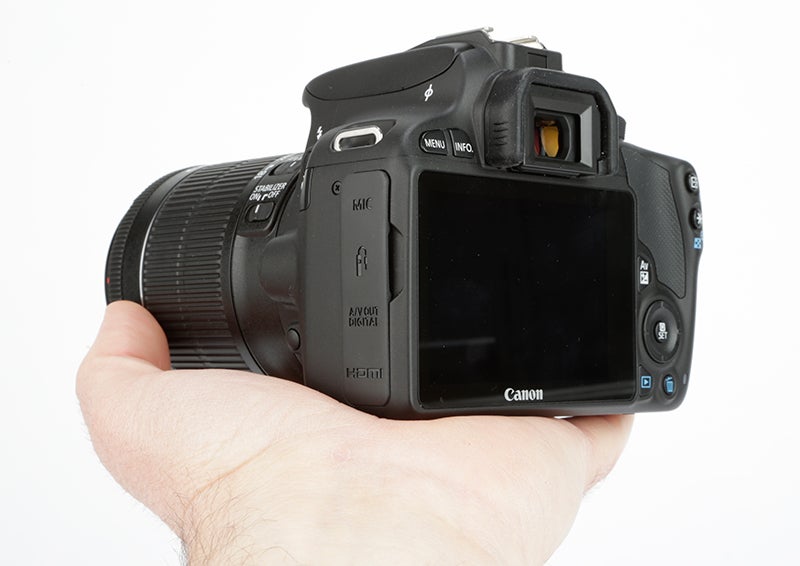 The Canon EOS 100D’s design is the model’s big talking point, but compared with previous models and CSC rivals, just how small is it? To give you some idea of its diminutive dimensions, it shaves off 9.1mm in height and 16.3mm in length compared to the Canon EOS 650D.

Up against CSC’s such as the Panasonic Lumix GH3, the Canon EOS 100D is around 20% thinner and 30% lighter, weighing a mere 407g on the scales body only. There’s no doubting the fact that this reduction in size and the way in which Canon has accomplished its weight saving is a great achievement, but with a smaller footprint comes a smaller handgrip to wrap your fingers around and less space at the rear for large, easy to access buttons. 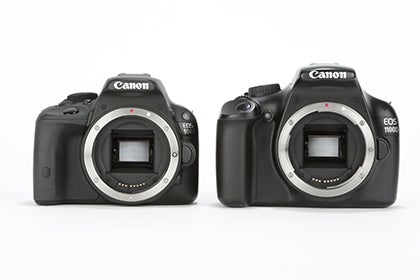 The body materials are made from aluminium alloy and polycarbonate resin with carbon and glass fiber. This is an improvement on the EOS 1100D’s stainless steel body construction that weighs 88g more. Unlike the EOS 1100D’s plastic veneer, the EOS 100D’s finish is much improved despite its weight loss. It feels refined in the hand, thanks in part to a newly added rubberised material at the front section of the handgrip and where the thumb lays to rest at the rear.

The Canon EOS 100D feels up to the task of heavy use and its build quality is now on par with other entry-level DSLRs in the market such as the Nikon D3200. Not surprisingly for a camera in its price bracket, the EOS 100D doesn’t feature weather sealing, unlike more expensive EOS models in the lineup.

The d-pad is smaller than we’ve seen on some Canon DSLRs, but this allows the 3in touch screen to be squeezed alongside. Menu and info buttons are accessed with your left thumb and it’s good to see that Canon has opted for two independent buttons for playback zoom control rather than one, which has been the case more recently on full frame DSLRs such as the EOS 6D and 5D Mark III. 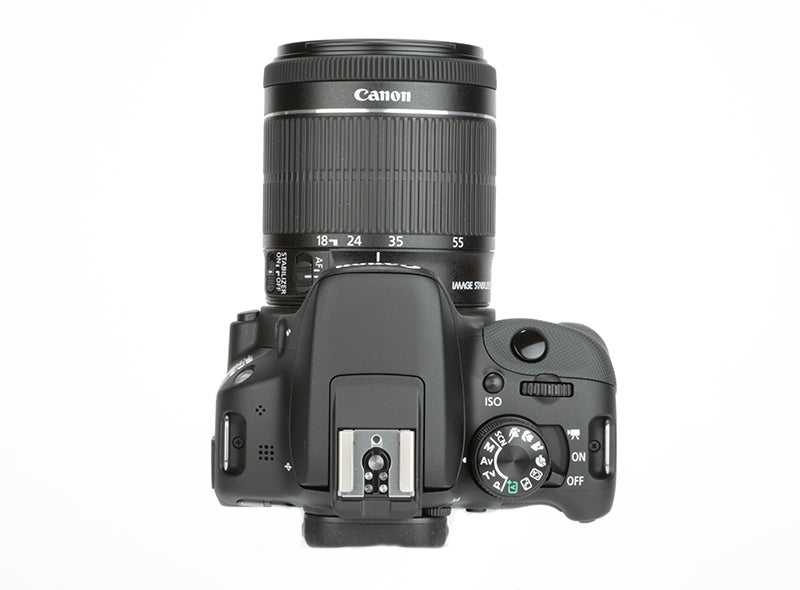 The Canon EOS 100D’s top plate is neatly arranged with an On/Off switch around the mode dial that can be operated by the thumb or index finger. Pushing the On/Off switch forward an extra notch accesses movie mode and there’s a dedicated button beside the scroll dial to access ISO settings on the fly.

To adjust aperture in manual mode, users are required to depress the AV +/- button and use the top plate dial, as only one scroll dial is located on the 100D’s body.

On the whole there’s very little to fault with the Canon EOS 100D’s design. Those with large sized hands may find that their little finger drops off the bottom of the grip and rests underneath. The build quality of the camera brings it into line with Canon’s other two DSLRs in the EOS for beginners range and clearly separates itself from the more plasticky designs we’ve seen in the past.