Staff from What Digital Camera were among those who turned out in Trafalgar Square earlier today to protest about the police's use of anti-terrorism laws to harass photographers taking pictures in public places.

Over two thousand amateur and professional photographers braved the cold to attend the ‘Mass Photo Gathering’ organised by the pressure group ‘Photographer Not a Terrorist .org’. TV and news crews turned out in force to cover the event, which was publicised mainly through Twitter and Facebook, and on photography websites including this one and AmateurPhotographer.co.uk.

WDC Editor Nigel Atherton and Deputy Editor Mat Gallagher attended the event, which was a mild-mannered affair, attended by an eclectic mix of the young and old alike, many of whom had been stopped by police or knew others who had.

‘This was an impressive show of unity by the photographic community to express our anger at the way the police have been using Section 44 of the Anti-Terrorism bill to persecute photographers for the last two or three years,’ says Nige Atherton. ‘Its quite right and proper that the police should keep a look-out for suspicious behaviour in the current climate, but unfortunately many police officers and PCSOs have decided that photography is a suspicious activity and anyone seen in public with a serious camera should be treated as though they are up to no good. This is still a free country, and there is no law against photography in public. It’s about time the Police – along with PCSOs, security personnel, council officials and other people in authority – were reminded of this fact.’ 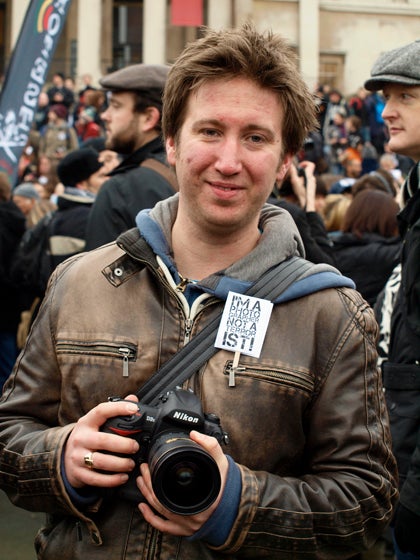