Panasonic has introduced a third model to its GH range of mirrorless cameras, one designed to compete with the Canon's EOS 5D Mark III for the video-shooting professional.

A radical departure from the GH2 before it, the new GH3 has had a number of significant changes to its video specifications. These, Panasonic claims, have come as a result of feedback from users of camera such as GH2.

GH3 users can now expect a greater range of capture options when shooting full HD video, with 50MB bitrate recording and MP4, MOV and AVCHD output options, together with the timecode feature seen on models such as the EOS 5D Mark III.

These are supported by both microphone and headphone sockets, the former now the more common 3.5mm standard, as opposed to the 2.5mm connector which featured on the GH2.

The new model also boasts a revised sensor, albeit one which maintains the same 16MP resolution as before. Panasonic claims to have made changes to better its dynamic range, specifically to ensure better shadow detail at lower sensitivities.

These changes are supported and enabled by the seventh incarnation of Panasonic’s Venus Engine, Venus 7 FHD, which the recent G5 model also employs. 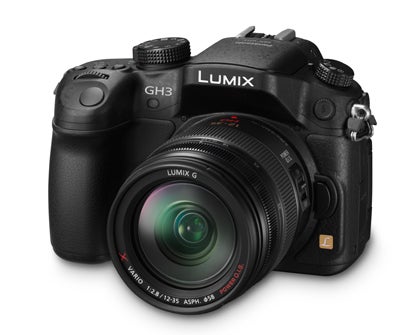 Both the electronic viewfinder and LCD have also been overhauled, both now being based on the OLED technology which has proliferated across many recent models.

The electronic viewfinder incorporates 1.74million dots and five aspherical lenses, and promises a contrast ratio of 10,000:1, while the rear display has a respectable – if not quite class-leading – resolution of 610k dots, with the further benefit of touch functionality.

Panasonic has also announced that the Lumix G X Vario 35-100mm f/2.8 Asph lens unveiled earlier in the year will also shortly become available, at an expected price of £1099, although the company has no plans as of yet to make it available as a kit option with the GH3.