GoPro, manufacturer of some of the world’s most versatile and durable cameras, has announced its latest camera in the lineup – the all-new HD HERO 3. Available in white, silver and black editions it’s roughly half the size of its predecessor and features built-in Wi-Fi connectivity.

The Silver Edition Hero 3 sits just above the White Edition and advances on its sister model by offering an 11MP camera and 10fps burst. Again, built-in Wi-Fi connectivity is featured and it records 1080p video at 30fps or 720p at 60fps. 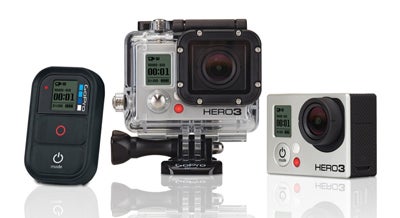 The Black Edition Hero 3 advances on the two cameras that sit beneath it in the range by offering a 12MP camera capable of a 30fps burst. It’s 30% smaller, 25% lighter and 2x more powerful than previous models and is fully waterproof to depths as deep as 60m. Capable of capturing ultra-wide 1440p 48fps, 1080p 60fps and 720p 120fps video, those desiring a cinematic look will also appreciate the ultra-high resolution 2.7kp-24 and 4kp-12 video modes.

To improve sharpness and remove distortion, GoPro use a 6-element aspherical lens with user-selectable ultra-wide, medium and narrow field-of-views available.

Understanding that sound quality is as important as image quality, GoPro has also redesigned the HERO3 to be as adept at capturing the subtle, natural sounds of voice and music as it is at capturing the immersive sounds of sport.

To watch a video to find out what the new HD HERO 3 is capable of, click here.

To find out all the specifications of the three HD HERO 3 models available, click here.