According to WDC’s scoring system, a perfect lens is one that scores 20/20 in five separate categories; Features, Design, Image Quality, Overall Performance and Value for Money. The more fundamental question, however, is what does a lens have to do in order to be awarded maximum marks in each of these areas? 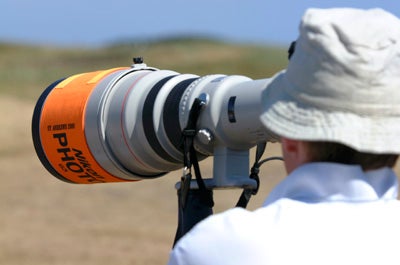 One of Canon’s impressive and highly desirable fast telephoto lenses in action at St Andrews during the Nikon-sponsored 2000 Open Golf Championship, captured using a Fujifilm S1 Pro. There was a lot of controversy when Fujifilm’s diagonally-constructed sensors were launched but there was some admirable creative thinking behind Fujifilm’s design. Photograph(c) Jon Tarrant.

Over the next few weeks I intend to explain some of the factors that determine the scores given to lenses in WDC’s tests. I’m going to start with Image Quality since this is the easiest aspect to score because it is based almost entirely on numerical MTF measurements. The critical value for resolution is 0.25 cycles-per-pixel and any lens that achieves comfortably above this level across its entire aperture range is very likely to get 20/20. The most common fly-in-the-ointment would be high levels of colour fringing, which may become particularly apparent under high-resolution conditions.

The underlying theory that explains lens resolution is known as the Nyquist Criterion and it’s such an important idea that it’s worth recapping on its essential elements. If you want to get to grips with the Nyquist Criterion then start by imagining what would happen if you were to photograph a chessboard at increasing distances, with the pattern getting smaller and smaller in the viewfinder and covering fewer and fewer photo-sites on the sensor. You would eventually reach a scale where each square on the chessboard fell exactly over a single photo-site on the sensor.

At this stage you would be recording the finest detail that the sensor can accommodate: or would you? To answer this question, imagine that you moved the chessboard half a square to one side: now there would be half a black square and half a white square falling over every photo-site. That would make the photo-site record a grey signal and the entire chessboard would have disappeared into a mass of uniform greyness. The only sure way to get the pattern back would be to project a larger image onto the sensor so that each square is now represented by more than one photo-site.

It turns out that if you want to be sure of being able to see the chessboard clearly, even when it is moved slightly to the side, then each square needs to cover at least two photo-sites in each direction. In this situation, if the camera were to be moved slightly to one side there would be a grey area created between each black-and-white pair of squares but there would still be clear areas of black and white. Importantly, it is not possible to enhance the image data to restore abrupt white and black squares by eliminating the intermediate greyness without prior knowledge of the intended image structure.

As an aside, it is worth noting that creative thinking in the area of image capture and optimisation is one of the factors that led Fujifilm to its diagonally-constructed sensors. This worked because there are few diagonal patterns in nature, so the pattern of the sensor is unlikely to mask any pattern in the image that will be captured. Sadly, Fujifilm’s imaging scientists have never fully been recognised in the mass media for their innovative approach

Returning to Image Quality and the Nyquist Criterion: the bottom line says that you need to use two photo-sites per image element in order to record the image unambiguously. The elements used in a resolution test chart are commonly black and white areas, like the chessboard described above, and a complete cycle in the pattern involves moving from a black area to a white area and then back to a black area. Nyquist says we need two photo-sites for each black area and two for each white area, making four photo-sites across a complete black-and-white pair. We can therefore deduce that the lens-and-sensor combination needs to be able to record 0.25 cycles-per-pixel (the word “pixel” has the same meaning as photo-site in this case) in order to satisfy the Nyquist Criterion. And that is why the 20/20 score for Image Quality is achieved by any lens that can deliver comfortably above 0.25 cycles-per-pixel right across its aperture range.

PS. Last week I promised to explain the diagonal distortion seen in my blog’s picture. The reason can be traced to the shutter movement (which may in fact be an electronic readout direction) being at 90-degrees to the movement of the camera. A similar effect can be seen in a well-known picture by Jaques-Henri Lartigue, dating from 1913. You can see the image at www.masters-of-photography.com/L/lartigue/lartigue_car_trip.html