With Christmas looming large here's our selection of the best Christmas gifts for men...

For the extreme sports (and camoflague) fan… 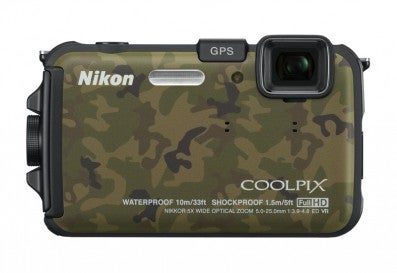 The Nikon AW100 is a ‘ruggedised’ compact, which means it’s
built tough to withstand the kind of conditions and treatment that would spell
the end of regular compacts. Looking at the numbers, the AW100 is waterproof to
depths of 10m, shockproof to drops of up to 1.5m, and freeze-proof down to
-10C. The camera itself gets a 16MP backlit CMOS sensor and a 5x optical zoom,
with a top shooting speed of up to 5fps to help catch all the action. Best of
all though, the AW100 is available in a natty camouflage colour scheme, and what
12-year-old boy wouldn’t want a camo compact?

For the first-time creative compact user… While there are more fully featured advanced compacts out
there, the SX150 IS comes in at a fraction of their cost and offers very good
value for money. Like it’s more expensive siblings the Canon PowerShot SX150 IS
benefits from full manual control, and also offers a good range of built-in features that budding young photographers can play around and experiment with. The camera itself is a little bulky and uses
2x AA batteries rather than a proprietary li-ion battery, however invest in a set of rechargeable batteries and a charger and this shouldn’t be too much of an issue.

For the aspiring DSLR user… Not only is the Nikon D3200 a fantastically capable camera
in it own right, but thanks to its built-in Guide Mode, it’s also a great
camera to master the basics of DSLR photography with. Built around a 24.2MP
APS-C CMOS sensor and Nikon’s own EXPEED 3 image processor, the D3200 is able
to capture staggering amounts of detail, which in turn gives you the ability to
crop your images without sacrificing overall image quality. Other highlights
include an 11-point AF system, 4fps continuous shooting, 1080p Full HD movies and
a 3in/921k-dot rear monitor for pin-sharp images when the camera is being used
in live view or Playback mode.

For the James Bond fan… Looking not unlike 007 might carry around with him the
Pentax Q10 is a compact system camera that places the emphasis on ‘compact’. In
fact, it’s currently the smallest CSC on the market and by some distance too. Using
a 1/2.3in backside-illuminated CMOS sensor with 12MP of effective resolution, the
Q10 comes with a generous selection of digital filter effects that can be mixed
and match to create all kinds of fun effects. If the £380 asking price for the
new Q10 model sounds a bit steep, then the Q10’s predecessor – the ‘Q’ – can
still be found online for around £250.

For boys that want to get closer to the action… The TZ25 is effectively the younger brother of the flagship
TZ30 travel compact. Whereas the more expensive TZ30 gets a 20x optical zoom,
the TZ25 comes with a still very flexible 16x zoom that offers the 35mm focal
range equivalent of 27-432mm. Elsewhere, the TZ25 also lacks the built-in GPS
functionality of the TZ30 and it’s 12.1MP CMOS sensor is slightly less powerful
than the 14.1MP chip inside the TZ30. In just about every other way though the
two cameras are identical, with the TZ25 also benefitting from full manual
control and 1080p Full HD movie recording. The other big difference is the
price, with the TZ25 coming in around £40 cheaper.

For the first-time compact owner… Ideal for the younger snapper, the L25 is a budget
point-and-shoot compact that comes with a 10MP CCD sensor, a 5x optical zoom
(28-140mm) and the ability to record 720p HD movies. Ok, so the feature set is
a little compromised in some areas – most noticeably the quality of the rear
LCD monitor – and picture quality isn’t going to compete with more expensive
compacts, however as a first-time compact the L25 offers great value for money
and a cost-effective stepping stone into the world of photography. As a first
compact, you could certainly do worse.

For the iPhone/Android smartphone owner… The SZ5 is one of the new breed of Wi-Fi enabled compacts
that allow you to post your captured images directly to social networking sites
such as Facebook without the need for a computer. Smartphone users can also
download the ‘Lumix Link’ app (free from the Apple App Store and Google Play),
which allows you to control the SZ5 remotely from your smartphone. The camera
itself is a very capable 14MP snapper, with a good range of features although
movie recording is pegged at 720p HD rather than the more commonplace 1080p
Full HD.

For the aspiring enthusiast (and bargain hunting mums and dads)… We freely admit that the LX5 is a bit of a wildcard entry on this list, given that it’s already two years old and has recently been superseded by the Lumix LX7.
That said, the LX5 earns its place here on account of being a fantastic advanced compact that’s now available at
a bargain price. At its heart the LX5 employs a slightly larger than average
1/1.63in sensor that offers 10MP of resolution, which is combined with a 3.7x
optical zoom with the 35mm focal range equivalent of
24-90mm. In keeping with its advanced compact positioning the LX5 can shoot Raw
images as well as JPEGs, which should keep budding Photoshop enthusiasts more
than happy. All in all the LX5 is a great camera, and now at a great price too.