The Canon SX1 IS provides a deep and realistic colour, compared to the Sony HX1‘s lighter yet punchier offering. Exposure-wise the Canon is quite conservative, which preserves detail well should you then want to tweak Raw files later. The HX1 is all-round brighter with exposure, though that’s not to say it overexposes. 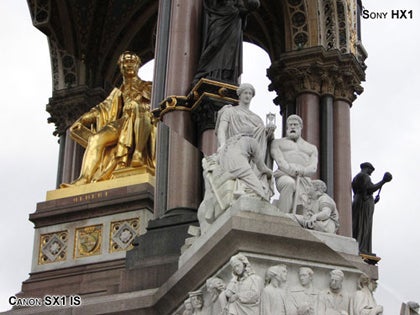 Sony’s Auto White Balance provided very consistent, albeit cold, results between different shots and ISO settings, while the Canon’s AWB did occasionally slip to a magenta cast in consistent lighting. 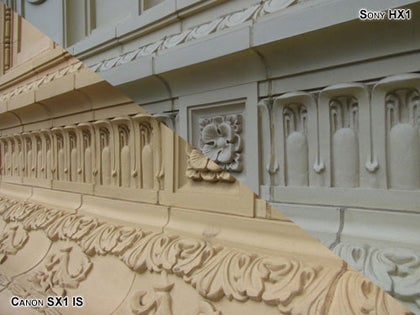 Canon is known for fine image quality, and while certainly the case here, in part thanks to the DIGIC 4 processor, it’s not actually the better of the two. The HX1’s images are considerably more detailed and sharper, even at higher ISO settings. 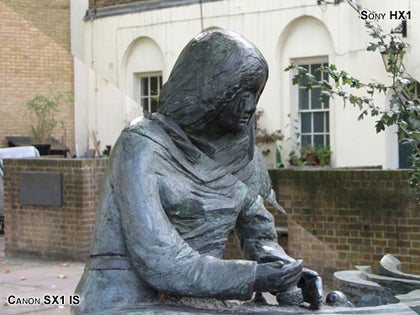 A possible bone of contention here is that the Sony HX1 doesn’t offer Raw shooting, whereas the Canon does. In those respects the Canon wins this fight, though with the .CR2 Raw file type you’ll have to ensure your Adobe Camera Raw software is up to date – Canon cameras don’t support the universal DNG format.

The Canon’s sensitivity range covers ISO 80-1600, with the Sony providing ISO 125-3200. Although the Canon does offer a ‘High ISO’ (ISO 3200) option, it’s not at full resolution and the limited size and lack of detail may prove limited for many.  As per detail and sharpness, the Sony HX1 retains greater detail at the higher ISO settings. Whereas the Canon SX1 sees image noise creep in from upwards of ISO 400, the Sony HX1 remains cleaner above this, with greater detail retention and less obtrusive noise even at the higher ISO settings. Sony’s ISO 3200 is notably noisy, but is available at full size unlike the Canon’s smaller offering.

It’s a really close call – both the Canon and Sony have their own likeability factors. While mightily similar on paper, the two are discerningly different in use. Performance-wise the Canon takes the bull by the horns and is more pleasing – from the menu system to the layout, the IS and overall responsiveness. But then enter the Sony and it all gets a tad complicated – it has the better quality images which are sharper and punchier. Then, of course, is the much talked about Sweep Panorama mode which, while not for every application, is frankly brilliant. It’s just the HX1’s LCD screen that’s a bit of a disappointment.

Then there’s the price – the Sony is the cheaper of the pair, but it also feels cheaper. The Canon is more expensive, but feels better built and, given its hotshoe and Speedlite flash compatibility, has an all-round wider scope to justify the cost. But, well and truly, such a significant cost – and this is on both counts – for what is essentially a superzoom compact raises the big question: should you buy an entry-level Sony Alpha or Canon EOS for near-on the same money? That’s a whole other question perhaps, as between these two it’s hard to decide which one could possibly take the crown – the Canon for overall performance in use, the Sony for overall image quality, detail and price.