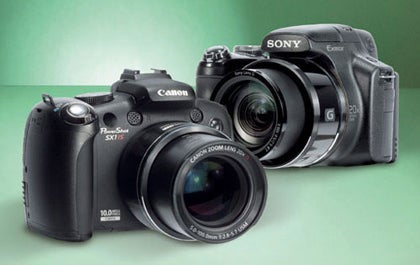 The term ‘compact camera’ perhaps doesn’t justify or explain the sheer technological advancement that both the Canon SX1 and Sony HX1 adhere to – they essentially are, at least by gesture given their considerable stature, compact cameras, but rather more ones that wrap up the highest-end technology available at this level. In fact, as well as the notable 20x optical zoom (28-560mm equivalent) lenses, there’s so much crammed into each of these products that the price point actually sails above and beyond that of some entry-level DSLR cameras. So just what do you get for your money and, given the apparent similarities between the pair, which one comes out as top pick of the two?

Both the Sony and Canon are weighty compacts – both in physical stature and on the features-front too. With a 20x optical zoom lens, a range from a wide 28mm through to telephoto 560mm (equivalent) is at your disposal, and that’s something really quite special. Neither skimp on the lens-front either, as the optical image stabilisation – Canon’s titled ‘IS‘ and Sony’s branded ‘SteadyShot‘ – provides assurance of sharp images in low light and, crucially here, when using longer focal lengths. High Definition movie recording is very much flavour of 2009, and neither model misses the pulse on this front – Full HD 1080p at 30 frames per second with stereo audio capture (though no 3.5mm external mic input) is a mainstay in both bodies, with the Canon’s one-touch record button making things that little bit swifter.

So far, so similar, but differences do begin to creep in. The Sony HX1 has a tilt-angle 3in LCD screen, with the more conventional 4:3 aspect ratio. The Canon SX1, however, has a vari-angle 2.8in 16:9 widescreen LCD which means it can rotate through all the angles – to face the photographer, the floor, or even the subject. Then there’s the Sony’s mind-bogglingly clever Sweep Panorama mode – a scene mode which, rather than stitching multiple single frames together one by one, simply takes a full single sweeping 180° panorama in one take as the camera is rotated and then presents a final, coherent panorama within seconds. It’s a lot of fun and extremely effective. Uniquely of the two, the Canon has a WL-DC300 remote control in its box – allowing zooming, shooting and menu options to all be addressed from afar. And, should you want to get really clever, the SX1 has a hotshoe that is compatible with Canon Speedlites, placing a whole new world of creative lighting at your fingertips should you splash a bit of extra cash on flash kit – quite the bonus compared to the Sony’s on-board-only flash.

Both cameras have a similar physical design, with a chunky grip to the right for sturdy hold. The Sony is marginally smaller though and, in this instance, it doesn’t necessarily work to its advantage as things feel a tad more cramped; in particular the buttons on the back will leave larger hands brushing up against the raised LCD screen’s edge.

The LCD screens themselves are also wildly different – the tilt-angle of the Sony HX1’s 3in screen provides vertical movement to face directly up or down or any measure in between, while the Canon’s vari-angle covers every angle, not just the vertical. However, while the latter may sound like an improvement, the 16:9 widescreen format just isn’t a traditional stills photographic ratio, which perplexes a little. It’s certainly a cinematic tradition, and while HD movie mode does feature, this being a stills camera it seems an oddity to have opted for such a fixed design feature, plus it limits the size to a smaller 2.8in.

The button-arrangement and menu functions also differ considerably on both cameras, with the Sony’s menu system following suit with all other Cyber-shot cameras and the Canon’s providing a more complex yet accessible multi-tiered system. Digging through the Sony’s menus is easy, but the Canon’s simpler offering with quick access functions and even a multitude of additional physical buttons provide the better solution. The SX1 has a rotational thumbwheel-type d-pad which will, much like Marmite’s long standing message, be something you’ll either click with and love or find annoyingly fiddly and hate. The HX1 has a more DSLR-like rear control wheel on the rear that also acts as a button for selecting and running through options.

Being such power-hungry beasts, it’s good to see that both Canon and Sony have opted for CMOS sensors, which tend to consume less juice. However, in the HX1’s box you’ll find a li-ion battery and charger, compared to the notable lack in the Canon’s. Instead you’ll have to fork out extra cash to replace 4xAA batteries once they run out – a greater expense on an already expensive camera, and a power-type that may not be preferred by some. There isn’t so much as the option for a li-ion battery in the SX1 either, nor an AA-battery option in the HX1. This is very much down to a personal preference.