Put head to head, it’s the independent performance of each camera that’s most important – and neither are a let down. However, for both, the LCD screens are perhaps a disappointment. For the Sony there’s a lagging blur whatever the conditions, while the Canon‘s screen, given its widescreen proportions, presents an even smaller image than its 2.8in when shooting in standard 4:3 format, plus there’s considerable screen noise in low light. 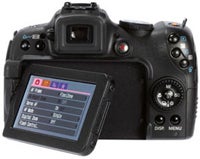 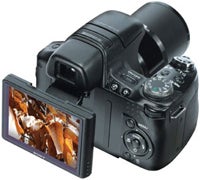 Canon PowerShot SX1 IS back | Sony Cyber-shot HX1 back

From LCD to electronic viewfinder (EVF) and it’s less rosy than it could be. In fact, both manufacturers could take a leaf out of Panasonic’s book – as recent EVFs on Lumix cameras, particularly the G-series, have been most impressive. For the Canon SX1 the EVF is wide and covers your peripheral vision, but does lack the detailed resolution that it ought to have. The Sony HX1 has a much smaller EVF that seems distant from the eye, where, like the LCD screen, images have a similar lagging real-time blur.

Things really do come up trumps where image stabilisation is concerned, though – especially that of the Canon SX1. As both systems are optically based, the difference at full zoom just on the LCD screen itself is significant, and particularly in the final image. This wouldn’t be so prominent with sensor-shift stabilisation, as the benefit wouldn’t work continuously to feed to your eye in real time. Sony’s SteadyShot is solid, though Canon’s ‘IS‘ pips it to the post.

On both counts the lenses are well considered, providing smooth, quick movement throughout the range, which never feel flimsy like some lesser compacts. Close-up, the Sony works with subjects nearer to the lens than the Canon, though at longer focal length extensions this is flipped on its head and the Canon takes pride of place.

Continuous shooting hits a super-fast 10 frames per second from the Sony HX1, something the 4fps Canon isn’t close to catching. However, the Canon does have a trick up its sleeve by including the option to shoot Raw & JPEG, compared to the Sony’s JPEG-only functionality. This seems to be one of the most major omissions from the Sony spec sheet.

With an RRP of £589 for the Canon SX1 it’s more than £150 dearer than the Sony HX1’s £430 asking price. We’re not talking small margins or even small prices at either end here though, and to pay upwards of £400 on a dedicated high-level superzoom requires certainty that you’re getting your money’s worth. On the one hand there aren’t many compact digital cameras more advanced than these two. However, this is equivalent to mega bucks and, when dealing with a cost margin such as this, a DSLR consideration may enter the minds of many.