£789.00
Both the Sony Alpha A77 and 65 were announced at the same time last year and while the A77 has generated the most headlines, the A65 has been a little overlooked. But in many ways, it’s the A65 that should be the more popular camera. While the A77 is designed to appeal to high-end enthusiasts, the more affordable A65 is aimed at a broader market, yet still shares many of the impressive features and technologies found on the A77. Is this camera the perfect blend of price and performance? Let’s find out… 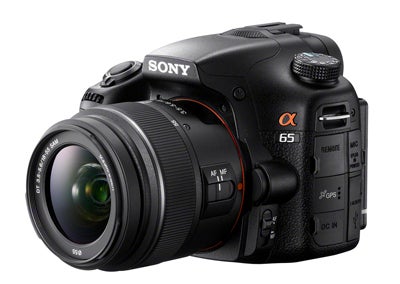 The Alpha 65 shares the same 24.3MP APS-C CMOS sensor that’s found in the A77. Combined with the BIONZ image processor that the A65 employs and you have a very broad ISO range from 100-16,000. As well as this, there’s also Multi frame noise reduction, with the camera automatically taking multiple shots, which are then merged into a single file, allowing you to shoot above the ISO 16000 ceiling if required. It’s a JPEG only option however as in-camera processing is required.

Thanks to large amount of pixels available, the A65 features two crop modes – just like the A77 also. The Smart Teleconverter allows you to shoot with either a 1.4x crop at a resolution of 12MP and a 2.0x crop with a resolution of 6MP. This means that as well as the 1.5x crop that’s applied for the APS-C sized sensor, a 200mm lens for instance will provide an equivalent reach of 420mm with the 1.4x crop and 600mm with 2.0x crop, making the A65 very versatile if you need to get up close to your subject.

Just like the A77, the Alpha 65 is based around Sony’s SLT technology. DSLRs traditionally have an internal mirror that allows you to see exactly what the camera is seeing through an optical viewfinder and when a shot is fired, the mirror is raised briefly and AF interrupted. On an SLT, the mirror is semi-translucent, with about two-thirds of the light coming through the mirror to the sensor, with the rest bounced up onto an AF sensor. This means AF is never interrupted and the frame rate improved – the A65 can achieve 10fps (frames per second). This does come at the expense of the optical viewfinder, which is replaced by an electronic equivalent in an SLT. 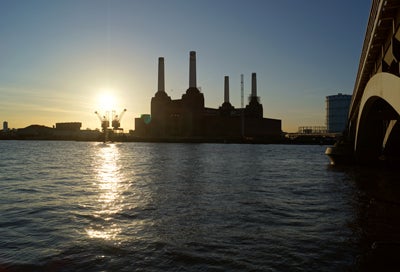 While optical viewfinders deliver a clear and bright display, electronic viewfinders (EVF) can appear dull, pixelated and unresponsive. The EVF in the A77 is the best we’ve seen so far and the good news is that the A65 features the same XGA OLED (Organic Light Emitting Diode) TruFinder with a resolution of 2.36 million dots. You’ll also get 100% coverage and a magnification of 1.09x.

The AF system in the A65 has been cut back from the 19-point system on the A77 to an 15-point array, with three of these AF points are cross-type variants, meaning they’re sensitive to both vertical and horizontal (compared to 11 on the A77). Not a match for the A77 then, but that’s to be expected, and compared to the competition, nothing to be sniffed at.

If you want to shoot a burst of images, the A65 is capable of shooting at up to 10fps, though you’ll have to be in the A65’s Continuous Advance Priority mode to achieve this. This does mean that if Continuous AF is selected, both the aperture and shutter speed can’t be adjusted, though focus is continually adjusted. In Single AF mode, both aperture and ISO can be adjusted, but focus is locked down from the point the first frame is captured. If you want more control, there’s also a dedicated continuous drive mode that’ll allow you to shoot at either Hi or Lo rates.

The 3in 921k dot Xtra Fine LCD is hinged at the bottom of the camera so it can be pulled outwards away from the camera by 180 degrees, while it can also be twisted round 270 degrees. It’s not a clever as the hinge system found on the A77, but it does allow a good level of movement and flexibility when shooting. Just like other SLTs in the Sony range, the 15-point phase-detect AF system is available during Live View shooting and video capture, rather than the slower contrast-detect AF system used by other DSLRs during Live View/video recording. The A65 supports full HD video at 1080p (50 or 25p) with stereo sound. There’s also an additional socket to attach a dedicated microphone should you wish. When in Movie Mode, exposure is set by the camera when using autofocus. Switch to manual focusing and you’ll have complete creative control, with options to shoot in M, S, A, P. 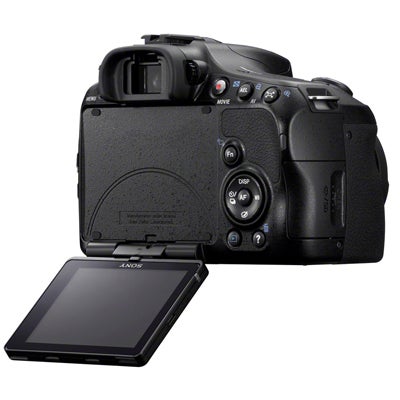 As well as the core manual controls of M, S, A, P, there’s a host of auto modes Sony’s Sweep Panorama mode. As the name suggests, you sweep the camera across the seen and as you do so, a series of high-resolution images are captured. These files are then stitched together in-camera to produce a final panoramic image. Because a series of still images are captured, resolution is very good – 8192 x 1856 for a standard horizontal shot or 12,416 x 1856 for wide horizontal, equating to 15MP or 23MP. Vertical sweep panoramas are also possible, though at slightly smaller resolutions. Providing you have a compatible 3D TV, there’s also the option to shoot 3D panoramas as well.