£450.00
Although the might seem quite different, the Sony A58 and A5000 are generally roughly comparable in most factors including price. Which one should you buy? Find out in our Sony A5000 vs Sony A58 comparison.

The Sony A58 sees the consolidation of two models – the Sony A57 and Sony A37. With some established leaders in this sector, does the A58 do enough to stand out from the crowd? 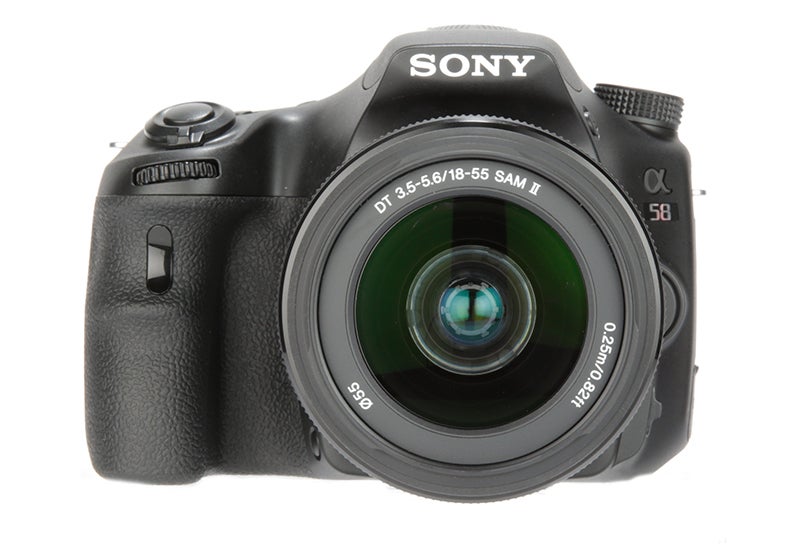 One of the big updates to the Sony A58 over the A57 is the sensor. Whereas at the A57 sported a 16.1MP Exmor APS HD CMOS sensor, the Sony A58 ultilises an all-new 20.1MP Exmor APS HD CMOS. This is married to an improved BIONZ image processing engine which individually adjusts levels of noise reduction and sharpness in different imaging areas, while the ISO is good for a camera in this class at 100-16,000.

As with all modern Sony DSLRs, the Sony A58 is based around translucent mirror technology (SLT). Out goes the moving mirror and pentaprism found in a typical DSLR, replaced by a fixed, semi-transparent mirror, giving the Alpha 58 its Single Lens Translucent (SLT) status.

If you haven’t come across this before, here’s how SLT works: About two thirds of the light coming through the lens travels through the translucent mirror to the sensor, with the rest bounced up to the AF sensor. The benefit of this is that autofocus can remain in action even when a shot is fired – on a traditional DSLR, the mirror is raised and AF interrupted very briefly when the shutter is triggered. Therefore an SLT’s burst frame rate can also be improved over DSLR rivals.

The absence of a pentaprism on the Sony A58 sees the optical viewfinder replaced with an electronic equivalent. This isn’t always a popular solution as electronic viewfinders (EVF) don’t quite have the same clarity or responsiveness as a traditional optical viewfinder. On the flipside however, you get a real-time display of the shot you’re about to take, ensuring you get the exposure spot-on before you fire the shutter. 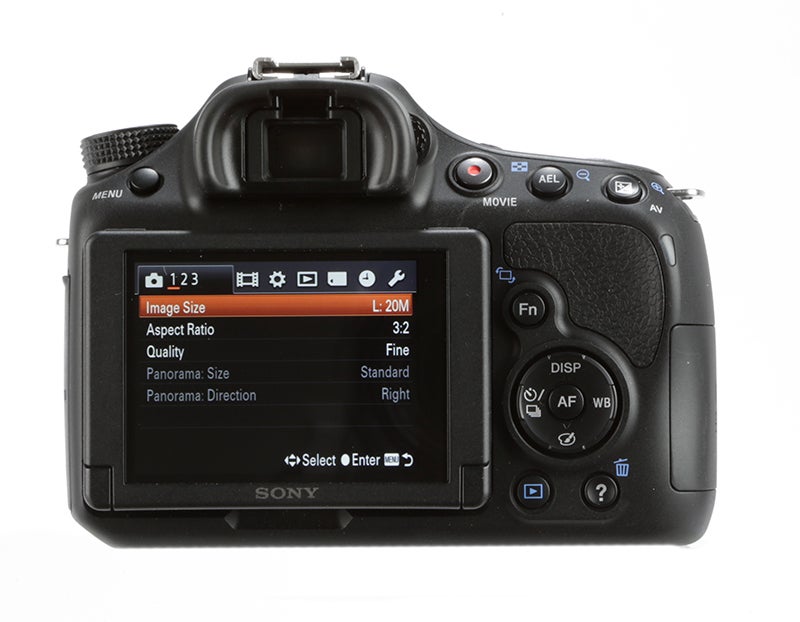 The Sony A58’s EVF maintains the same 1.44m dot resolution as the A57, but now uses OLED Tru-Finder technology as opposed to an LCD, reducing overall power consumption, while the viewfinder offers a 100% field-of-view that DSLRs with optical viewfinders at this price point can’t quite match.

Interestingly, the rear screen on the Sony A58 has shrunk in size from the A57, with a 2.7in, 460k-dot display now in place compared to the 3in, 921k-dot screen on the A57. The screen can be pulled out and angled for different shooting heights, but because its hinged differently from that on the A57, doesn’t offer quite the same breadth of movement.

There’s a 15-point AF system, with 3 of those points the more sensitive cross-type variant, while the Sony A58 also benefits from a new Lock-on Autofocus technology for speedier, more accurate subject tracking. Thanks in some part to the SLT technology, the Sony A58 is also capable of shooting at a very fast 8fps (frames per second), though this is using the camera’s dedicated Tele zoom Continuous Advance Priority AE mode. The centre of the image is magnified 2x in this mode (automatically cropping the viewfinder), seeing the resolution drop down to 4.9MP and you’re only able to shoot in JPEG. Again, this is slower than the all-out pace of the A57, which could shoot at up to 12fps in Tele zoom Continuous Advance Priority AE mode, while more tellingly, was also capable of shooting at 10fps at full resolution compared to 5fps for the A58.

The Sony A58 features a new Auto Object Framing technology that builds on the Auto Portrait Framing feature introduced last year. Set to this mode, the A58 judges what’s in the scene – including people, close-up and moving subjects, before tracking, framing and cropping the shot for what Sony say will produce powerful, professionally-framed compositions. Any cropped images go through Sony’s By Pixel Super Resolution technology to be boosted back to the camera’s native resolution, with both the original and re-composed files saved. There is also 15 artistic in-camera Picture Effect treatments that can be applied to the shot.