Other than some very minor changes, the D5200’s body is unchanged from the D5100. This reinforces the fact that Nikon has focused its mind on updating the internals rather than unnecessarily experimenting with a new exterior design. As with all tests, there’s no better way of comparing the design of one camera to another than in a side-by-side comparison so we called in the D5100 to draw our own conclusions. 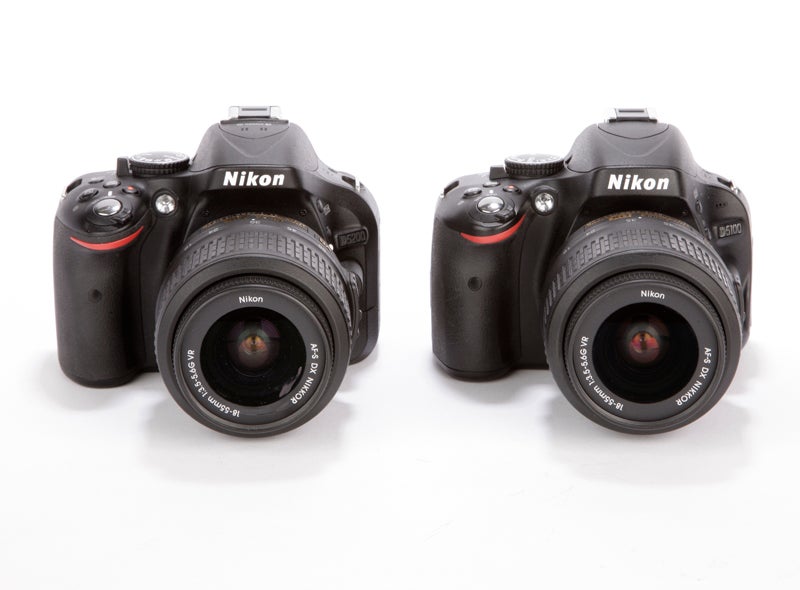 From the front, it’s hard to identify the design tweaks that have been made to the D5200 when you put it up against its predecessor – the D5100.

Interestingly, the D5200 is 45g heavier than the D5100, despite it sharing almost identical dimensions and the same footprint The handgrip is marginally chunkier than its entry-level cousin but it is not as beefy to hold as the D7000 so it an ideal compromise between the two.

As we discovered when handling the camera, users with large sized hands may find that their little finger drops off the bottom of the grip and rests on the underside of the battery compartment. This is a minor point however on an otherwise comfortable and well-sculpted handgrip.   Ergonomically, little has changed in terms of button arrangement. There’s no top plate LCD display and a mode dial takes its place, with a toggle-type Live View switch around the perimeter. This makes for an intuitive way of accessing Live View, however others may prefer a more conventional button beside the screen. 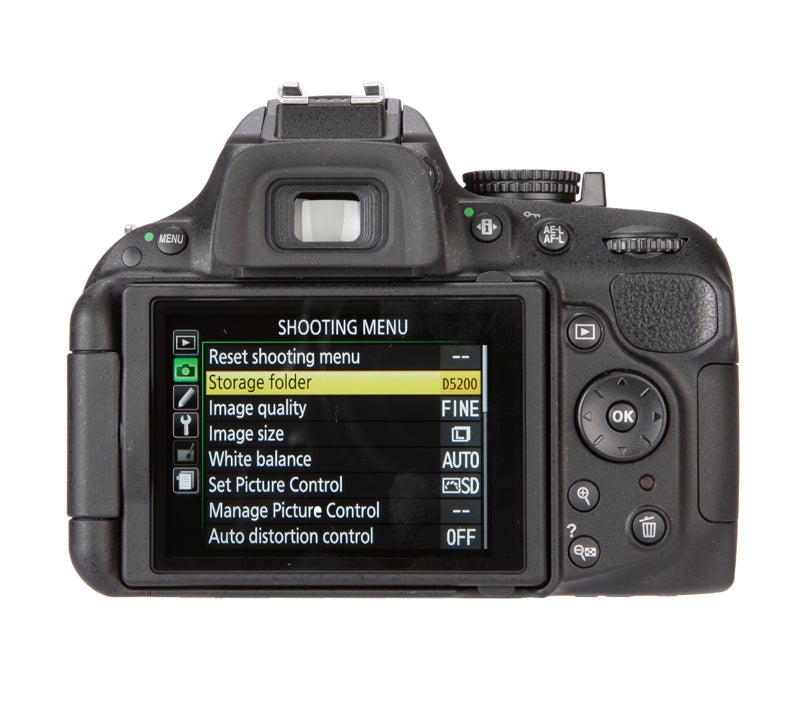 The D5200 features a clean and uncluttered arrangement of buttons of buttons at the rear.

One new button is located to the right of the Live View switch. It offers access to continuous shooting and self-timer settings. Ideally, we would have preferred this to control ISO as unfortunately there’s no dedicated button for this on the body. Instead you have to assign it to the function button that’s found to the side of the pop up flash or head to the graphic user interface (GUI).   On the subject of the GUI, the redesigned dark guise makes the dials and settings clearer to read. Shutter speed, Aperture and ISO are displayed at the top, with the exposure indicator, AF area mode and other settings listed beneath. Nikon has paid close attention to detail – the graphic which displays aperture even mimics the lens blades opening and closing in relation to the aperture you set. It makes for a very intuitive operational experience and we envisage it won’t be the last time we see it featured on Nikon DSLR’s.

At the rear, there’s a renewed d-pad that’s less plasticky than the previous version. As with most DSLRs at this price point, there’s only one command dial which means you’ll need to hold down the exposure compensation button when you want to switch between changing shutter speed and aperture. This does affect the handling somewhat, particularly if you’re familiar with using a DSLR with two scroll dials. It’s a compromise you have to make if you desire a smaller body that’s more affordable.

The good news for anyone upgrading from the D3100, D3200 or D5100 is that the camera uses the same EN-EL14 battery and accepts all types of SD card. What’s more, the simple and effective design lends itself to both newcomers and those who may be looking at it as an upgrade option from an older Nikon DX-format DSLR.