£1,149.00
The last couple of years has seen a bit of renaissance for the Fujifilm brand in the eyes of the photographer, starting with the lovely X100 premium compact camera that was then followed by the X10 and the company’s first Compact System Camera, the X-Pro1.

With rangefinder-inspired looks and a brand new sensor technology that’s impressed, the X-Pro1 has found its way into the camera bags of both professionals and keen enthusiasts alike. But while it looks like a bargain compared to a certain German brand of rangefinder camera that its taken its inspiration from, the X-Pro1 is a premium camera in its own right. But with the arrival of the X-E1, Fujifilm hopes to broaden the appeal of their X-series CSC range further still.

With a specification that borrows much from the X-Pro1 in a slightly smaller, more affordable body, does the X-E1 hit the sweet spot for the enthusiast photographer? 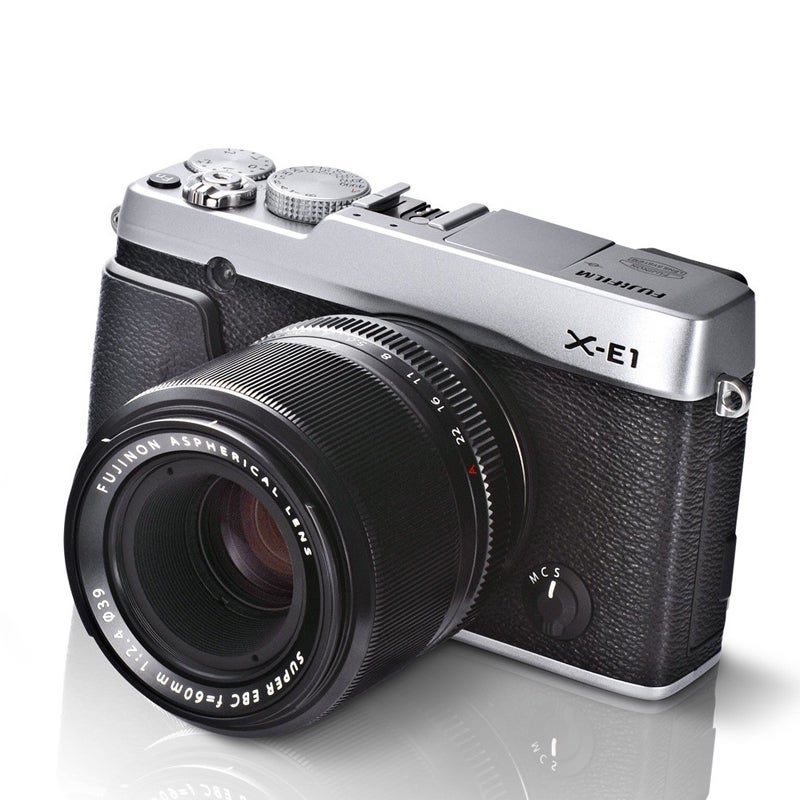 One of the jewels in the crown of the X-Pro1 is the 16MP APS-C sized sensor, and the good news is that the X-E1 uses the very same chip. It’s a little bit special because of the unique and clever way the sensor’s colour filter array is arranged. Most digital cameras feature a traditional Bayer filter array to decipher colour information, but this results in aliasing effects such as moiré patterning. An anti-aliasing filter in front of the sensor is then required to eliminate such artefacts, but works by ever so slightly blurring the image and results in a very minor loss in critical sharpness. The X-Trans CMOS sensor inside the X-E1 however uses an array of red, green and blue pixels that aren’t arranged in a repetitive order. With a structure more akin to film, the sensor can effectively minimize moiré and false colour, eliminating the need for an anti-aliasing filter, which should in turn deliver far sharper results than more conventional sensors. On top of this, there’s Fujifilm’s EXR Pro image processor on board, and while the native ISO range is fairly moderate, running from 200-6400, it can be expanded to an ISO equivalent of 100-25,600, though the highest two settings are JPEG only. 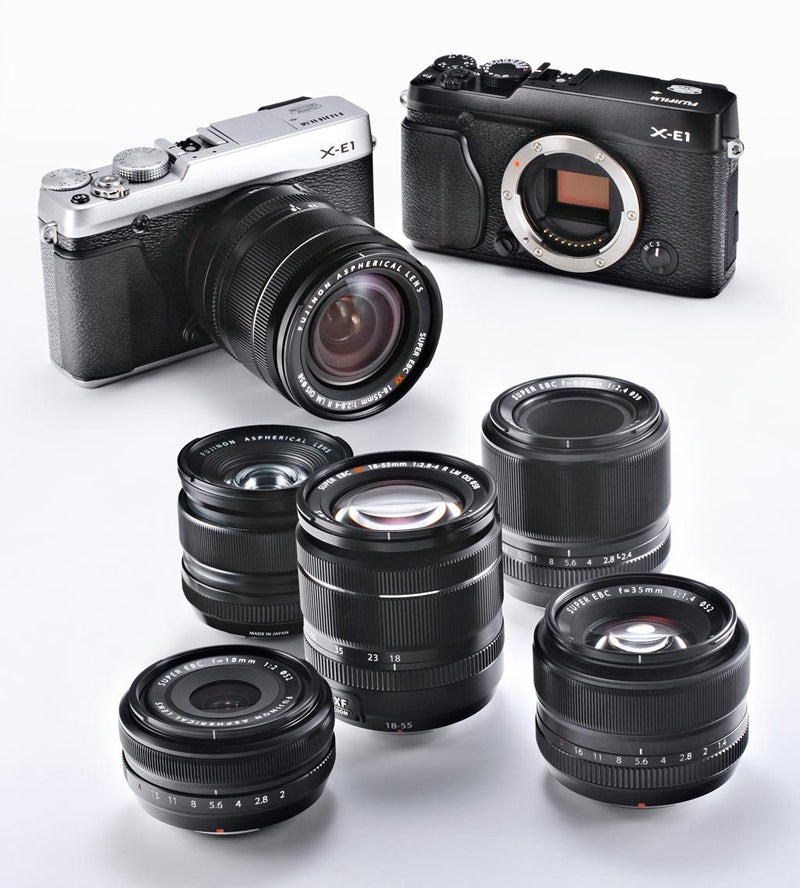 As you’d expect, the X-E1 uses the same X lens mount as the X-Pro1, with the range of XF lenses available growing from the initial three to now include a Fujinon XF14mm f/2.8 that delivers a 35mm focal length equivalent of 21mm, and the first zoom of the range. The 18-55mm f/2.8-4, that’ll be bundled with the X-E1 from X-series stockists, with a 35mm focal length equivalent of 27-84mm. It’s far removed from what you usual associate with this ‘kit lens’ focal length, with the finish not only matches other XF lenses (i.e. very good), but the fast if variable maximum aperture of f/2.8-4 means it’s a highly versatile proposition. Especially when you factor in the built-in OIS image stabilisation system equivalent to 4 stops and a responsive linear motor. As it features a variable aperture, there’s no longer a marked aperture ring. Instead, it rotates continuously, with each click round representing a third-stop change. To set the camera to set aperture (for instance, when you want to shoot in shutter priority), there’s a separate switch on the side to select this. Since the launch of the X-Pro1 we’ve also seen the arrival of an M Mount adapter, allowing you to use some lovely Leica glass as well. 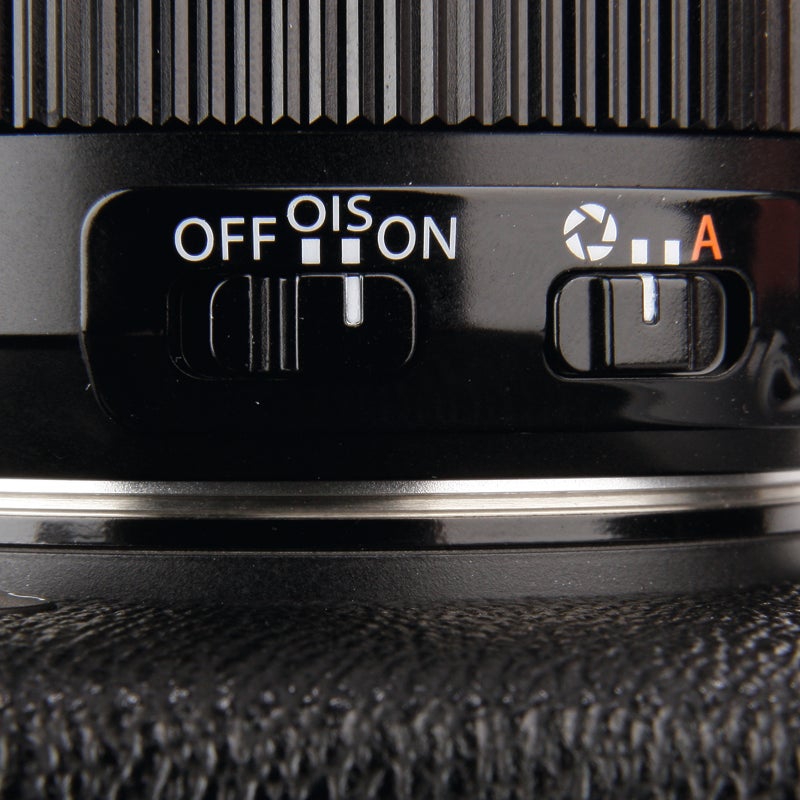 Probably the most notable difference between the X-Pro1 and the X-E1 is the viewfinder. Rather than using the clever hybrid viewfinder that provides both optical and electronic options, the viewfinder in the X-E1 is solely electronic, saving both on weight and the cost implications incurred. But Fujifilm hasn’t just done away with the optical viewfinder, leaving you with the same EVF as the X-Pro1. Instead, they’ve improved on the X-Pro1’s 1.44m-dot LCD EVF, fitting the X-E1 with a 2.36m-dot OLED unit in the X-E1.

At the rear of the X-E1 is a 2.8in screen with a 460K-dot resolution that’s the same as that found on the X100, but a touch smaller than 3in display on the X-Pro1 with its huge 1,230K-dot resolution. Unlike the X-Pro1, the X-E1 sports a pop-up built-in TTL flash, while there’s also a hotshoe to attach one of Fujifilm’s additional dedicated flashguns. 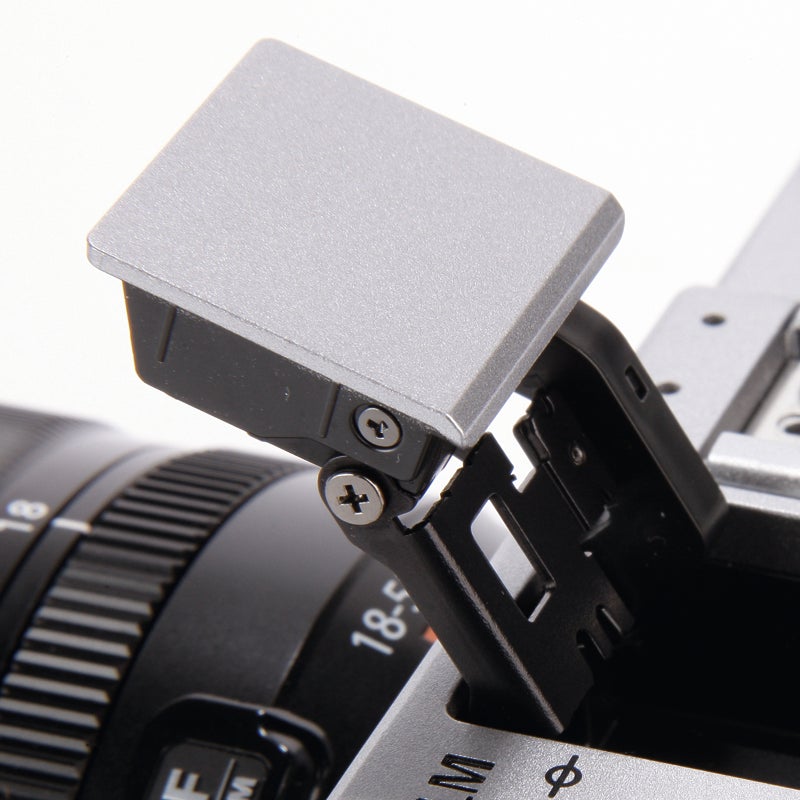 Just like the X100 and X-Pro1, the X-E1 uses a 49-point contrast-detect AF system, fine-tuning the algorithms from the system found in the X-Pro1 to provide what promises to be faster much faster focusing speeds and low-light performance (the good news is that X-Pro1 users can also benefit from this by upgrading to Firmware version 2.0).

The X-E1 features Motion Panorama, with the camera capture multiple image as you pan across the scene, before it stitches them together to produce a large panoramic photo.