Lomography has announced that the Petzval lens, funded to the tune of $1.3million on Kickstarter, is now available for pre-order

Lomography’s long-awaited Petzval lens is now available for pre-order. If you gave more than $300 to the Kickstarter campaign it should be on its way to you already, if not you can put your name down for one now for £549.

The Petzval lens is available in Nikon F and Canon EF fit. Don’t get too excited yet though, as Lomography estimates that pre-orders won’t be received until around May 2014.

There’s
retro, and there’s nostalgia, and then there’s this. Lo-fi camera
production company Lomography has launched a crowdfunding Kickstarter
project to reinvent a lens from the 19th Century.

The
Petzval lens, named for its creator Joseph Petzval, is a portrait lens
that enjoyed enormous popularity throughout the 1800s and helped shape
the face of commercial photography as we know it today.

In
order to fund a 21st Century reintroduction of this lens, Lomography has turned to Kickstarter,
offering perks and rewards for donations that include not only delivery
of the lens as soon as it is available but also name engravings and personalisation. 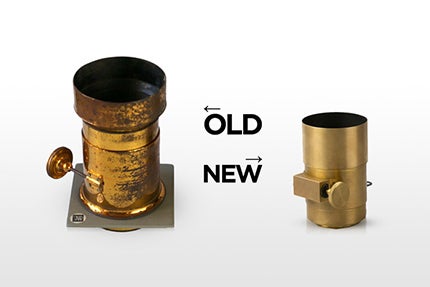 Image: The 19th Century model side by side with the sleek new 2013 version that has an increased maximum aperture. Source: Kickstarter

With
an fully updated design for the lens that includes a maximum aperture
increase from around f/3.5 to f/2.2, Lomography no doubt hopes to repeat
the success Joseph Petzval enjoyed. The new Petzval lens will be available for Canon EF and Nikon F
mounts on Analogue and Digital SLR cameras.

While
most lenses are designed to narrow field curvature, the Petzval is
deliberately engineered to do the opposite, creating artfully stylised
images with sharp subjects against blurred backgrounds.

At
the time of writing, the firm has twenty-six days left to secure its
funding, and has already made its $100,000 goal eight times. So it seems
safe to say that the company’s stated goal of having the first 1000
lenses shipped out by December 2013 should become a reality.

You
can still donate at the Kickstarter page to be eligible for the perks
and awards, or to put your name down for one of the lenses. The retail
launch price of the lens is currently planned as $499/€499 (about £325).

So, what do you think? A creative way to do something different with your images, or a dismissal of more than a hundred years of refinement in optic techology?

Watch the video below to find out more: