The 500mm f/4.0 lens is a serious piece of sports or wildlife glass that really expands the range to new heights of super telephoto. And, with its premium G-type elements, it’s guaranteed to perform superbly. 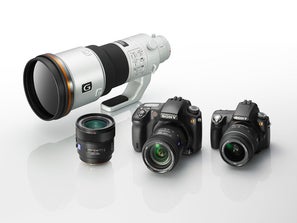 At the opposite end of the scale a wideangle Distagon T* 24mm f/2.0 lens was also announced. This new Carl Zeiss optic has Super Sonic Motor (SSM) for near-silent use.

No release dates or production schedules as yet, but it certainly seems that 2010 is the year Sony is set to become an even more serious player in the imaging market.