For a few months now there have been rumours circulating that Apple may be working on a low cost iPhone. Although there are no facts to support the speculation of a cheaper iPhone arriving later this year, a low cost iPhone would clearly make it appeal to a much wider audience and help to maintain Apple’s market share in the extremely competitive smartphone market.

Some of the latest rumours suggest that the plastic casing the iPhone mini could use would be supplied by a US-based electronic manufacturing company, says DigiTimes.

Other rumours are circulating that the new iPhone may adopt a mixed chassis made from plastic and metal. A story posted on Business Insider suggests the internal metal components may be able to be seen through a clear or transparent plastic casing. If this were to be the case, Apple would be retracing their steps back to the original iMac where a similar transparent colour casing was used on the exterior to expose some on the innards.

What about its name? Well, rumour has it that a more affordable iPhone could be called the iPhone mini. When you think that Apple named its smaller iPad the ‘iPad mini’, there’s reason to suggest Apple will continue to use the ‘mini’ appendage and roll it out across numerous devices.

If the concept designs that we’ve seen on the web are anything to go by, the iPhone mini will be a smaller, more compact version of the current iPhone 5. If this is to be the case, it’ll make it easy for consumers to clearly identify the entry-level iPhone from the current premium iPhone 5.

To save manufacturing costs and to lower the price of the end product, it’s anticipated that the iPhone mini could feature a shell that’s made from strong polycarbonate plastic. This material is currently used for other smartphones on the market. Though it may not have the same premium finish of the iPhone 5’s aluminum casing, it’s likely to cost much less to machine and mass-produce, thus reducing the end cost to the consumer. 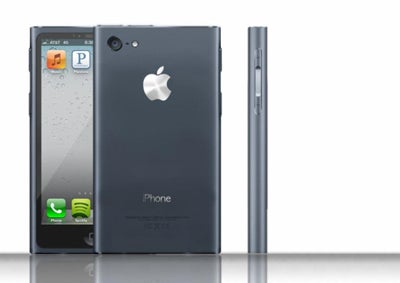 An iPhone mini concept design by Dallas Bradshaw on www.concept-phones.com

As for the internals, there’s speculation that the entry-level iPhone could adopt technology we’ve seen within previous generations of iPhone. There’s the possibility that Apple may utilise the 8MP camera from the iPhone 5 and introduce an all-new camera into the iPhone 5S – a product we expect to arrive at a similar time to the iPhone mini. Alternatively, Apple could potentially use the 5MP camera from the iPhone 4 to cut costs. This would be considered as a backward step however and therefore is highly unlikely.

Since the iPhone 4’s launch in June 2010, we’ve seen two new iPhones arrive – the iPhone 4S and iPhone 5. Neither of these products have really changed in terms of their design and the general consensus from reading rumour websites and forums is that it’s time for the Apple to take a different direction with the appearance of the iPhone.

Many of the concept designs suggest the iPhone mini could be thinner and squatter. It may lose the black bands at the top and bottom of the phone where previously the home button and speaker are located. If this was to be the case it would make the phone appear square rather than rectangular.

If the iPhone mini was to be made thinner than the iPhone 5, there’s the possibility it may share a similar thickness to the latest iPod. The new lightning port introduced into the iPhone 5 suggests that future iPhones could be even thinner and much lighter. We predict any buttons at the side of the iPhone mini would be thinner, but what about the headphone port? Presumably, much like the iPhone 5, this would be located at the bottom left corner. 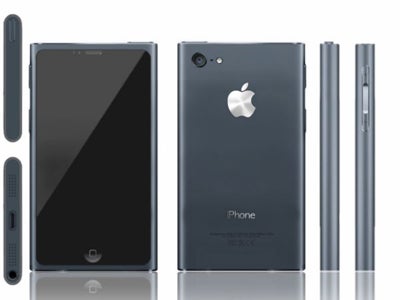 More concept designs from Dallas Bradshaw as posted on www.phonesreview.co.uk

Other rumours from various online sources suggest the iPhone mini may have a reduced memory capacity. This is another way that Apple could reduce the size and cost of the product. There’s talk that the iPhone mini may only have enough memory to buffer media streamed from the cloud.

Of course, the iPhone mini is entirely speculation at present. We’ll have to be patient to find out if there’s any truth in these rumours later in the summer.

To read our iPhone 4S vs iPhone 5 review, click here.

To watch our iPhone 4S vs iPhone 5 video, click here.