All the lenses feature the same high quality silver metallic finish and generously wide manual focusing ring. To keep them small, Sony’s sensor based SuperSteady Shot stabilisation has been omitted from the NEX cameras in favour of optical image stabilisation (OSS) in its lenses, and both zooms feature this. Although new in Sony’s still cameras, OSS is used in some of Sony’s camcorders, so it isn’t a new and untested technology. None of the lenses feature an OSS switch ¬ the feature is controlled from the camera’s menu.

Other features of the lenses include a Manual Focus assist option, whereby you can manually override the AF by turning the manual focus ring, and  circular apertures for a more attractive bokeh.

In addition to these two lenses Sony has also produced the LA-EA1 Mount Adaptor which enables the attachment of the 30 lenses from Sony’s Alpha range. The adaptor provides full auto aperture control but not AF, so you’ll have to focus manually. Finally an UltraWide converter and Fisheye Converter will be available from the autumn which attach to the front of the 16mm pancake for an even more wideangle field of view.

More lenses are promised but Sony say that they will be listening to user feedback before deciding which focal lengths they will develop next. 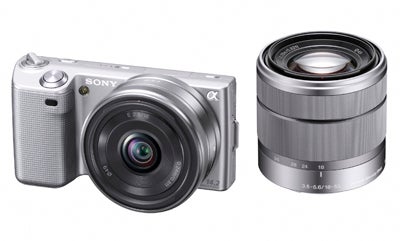