The Fujifilm X100S is the one of two Fujifilm X-Series cameras to be announced at this years Consumer Electronics Show (CES) in Las Vegas.

One of the most popular cameras of recent years, Fujifilm’s X100, has finally been succeeded by a model said to carry over 70 improvements.

The most significant improvement in the new X100S concerns the newly developed imaging sensor, which is based on the same X Trans CMOS technology as featured in the company’s X-E1 and X-Pro1 Compact System Cameras. APS-C in size, the 16.3MP sensor not only presents an advantage in resolution over the 12.3MP X100, but together with the new EXR Processor II, Fujifilm claims the new model delivers images with 30% less noise too.

The new processor is also said to benefit the camera in a range of other ways, from a claimed 0.9sec start-up time and faster shot-to-shot speeds, to a 31-frame burst depth, now at 6fps. Furthermore, the processor also allows for a new Lens Modulation Optimizer feature, which is said to help counter the effects of diffraction at smaller apertures among other aberrations.

As if that wasn’t enough, Fujifilm claims the X100S delivers the fastest autofocus speed of any current compact camera equipped with an APS-C sensor and a fixed lens. 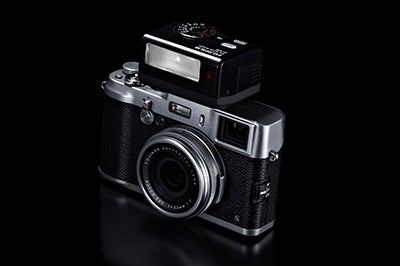 The new model retains the hybrid optical/electronic viewfinder of the X100, although the resolution of the electronic panel now stands at 2.35million dots, next to the X100’s 1.44million. Another improvement comes with the camera’s HD movie functionality, with full HD recording at 60fps next to the X100’s more basic 720p option.

Fujifilm has revealed that the price of X100S will be £1099. It’s expected to be available in time for Focus on Imaging 2013. For more information visit: www.fujifilm.eu/uk/

At the same time as announcing the X100S, Fujifilm also unveiled the X20. Click here to read our Fujifilm X20 news story.