After 24 years Focus On Imaging, the biggest photography show in the UK is no more. What Digital Camera finds out why...

In a statement released earlier today, Mary Walker Exhibitions announced that it would be closing the show after it’s 24 years of running and that the 2013 exhibition was the last.

Focus On Imaging has attracted over half a million visitors in its 24 year life span, with the 2013 exhibiton gaining almost 35,000 visitors – 8% down on the previous year.

It has not been known if Focus On Imaging has been having any financial difficulty, however it seems that the event was becoming difficult to organise with key photographic companies missing from previous shows including Sony, Samsung and Panasonic. 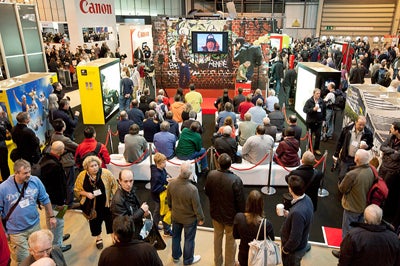 Not to be Sold

It seems the decision to close the show would have been under discussion for some time, and in the statement released Mary Walker has said that the show “will not be sold – I’m simply bringing it
to an end.”

Ms. Walker seems positive for the future of the industry stating: “I am certain that the time is right for the
industry to perhaps find fresh opportunities and bring new ideas to
photographers – maybe we’re due a new revolution of some kind?”

The largest show of this kind in Europe is the bi-annual Photokina, which next takes place in Cologne in September 2014. Around 185,000 people from around the world attended the show in 2012.

Reactions on Twitter today mark the sadness at the loss of the Focus On Imaging show. @missaniela noted the shows longevity stating “End of an era – goodbye Focus on Imaging”, while ‏@Paularthurphoto took an emotional response; “It seems that there will never be another Focus on Imaging… I’m actually grieving.”

@RCAHMSphoto group noted the shows usefulness: “So sad to see the demise of #focusonimaging It was a great place to see new kit before buying.” @churchill_photo made a poignant, debatable comment “Another blow for the declining photographic industry” after the news was announced this morning.

‘Following a successful and long-running contribution to the
photography industry spanning  24 years of the annual Focus On Imaging
exhibition – and after more than half a million visitors have enjoyed
photography through the Show – Mary Walker Exhibitions would like to
announce that the 2013 Focus on Imaging exhibition was the last.

Mary
Walker said: “Focus On Imaging will not be sold – I’m simply bringing it
to an end.” She continued: “It is with great pride that I look upon an
amazing period of time in my life, where I continually worked hard to
run Focus On Imaging to the absolute best of my ability.

I myself, the
Show and my committed team have witnessed the phenomenal growth and
revolutionary changes that have come to the photographic industry, and I
am proud to have offered photographers and manufacturers an opportunity
to come together professionally and personally over the years.

“  Mary
said: “There are now so many elements of a photographer’s working life
that we simply could not have imagined back at the inception of the
original ‘Focus On Photography’ as it was 24 years ago.  It’s been an
immensely rewarding job that has brought experiences and friendships
that will always remain.

I am certain that the time is right for the
industry to perhaps find fresh opportunities and bring new ideas to
photographers – maybe we’re due a new revolution of some kind?”

Mary
is aware that she has a long list of people to thank, concluding: “I
would like to offer my thanks to all of the exhibiting companies, large
and small – both now and in the history of the Show – for their support;
then of course my small team who have helped make everything happen
each year; and certainly Focus would never have been the experience that
it became without the visitors who walked through its doors. It’s been a
fantastic journey.”‘