What Digital Camera lays hands on the Canon EOS 1D X ahead of a full, in-depth review

One of the cameras we’ve been eagerly awaiting to review at What Digital Camera finally arrived at our offices at the end of last week. Those that can cast their mind back to the launch of the Canon 1D X will remember it was almost ten months ago that this camera was announced. Now that production issues and high demand from professional sports photographers at the Olympic Games seem to be over, it’s great to have the opportunity to finally lay hands on Canon’s flagship model before putting it through its paces in our full review.


Replacing both the EOS-1Ds Mark III and EOS-1D Mark IV models in Canon’s line up, the Canon EOS 1D X has been designed to offer the most advanced features of any Canon EOS DSLR to date. Rather than featuring the 16.1Mp APS-H sized CMOS sensor as found within the Canon 1D Mark IV, the 1D X benefits from a full frame CMOS sensor that delivers an 18.1Mp resolution. This chip provides an incredibly wide ISO range that runs from 100-51200 and from within the ISO speed settings there’s the opportunity to expand this further by an extra two-stops to a maximum of ISO 204800 in the H2 setting. These extremely high sensitivities will be of great advantage to professional photographers working in low light conditions where they demand the use of fast shutter speeds to freeze any high-speed movement. In our full review we plan to subject the EOS 1D X to series of challenging low-light, high-speed action sequences to find out just how far the ISO can be pushed before image quality begins to degrade. 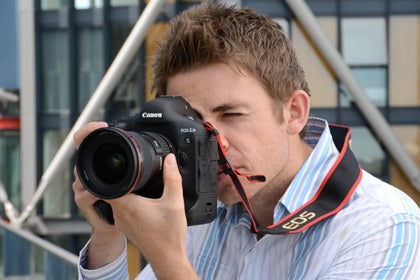 To handle the large volumes of data, the EOS 1D X is fitted with not one, but two DIGIC 5+ processors. These are intended to work in tandem to deliver what Canon claim to be their fastest and most advanced image processing to date. When you consider the fact the EOS 1D X is capable of shooting a rapid burst at 12fps or up to 14fps in its Super High Speed mode, these DIGIC 5+ processors really have their work cut out if they’re to process and write the data to the card incredibly quickly. On the subject of cards, the 1D X like most professional DSLRs features a two-bay slot ready to accept two Compact Flash forms of media. It is interesting to see that Canon hasn’t been influenced by its closest rival – Nikon’s D4 which features an XQD slot. 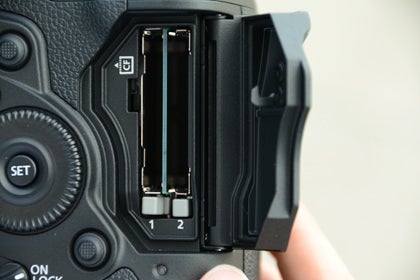 The AF system found within the EOS 1D X is completely new, however we’ve already witnessed a similar layout of AF points in Canon’s EOS 5D Mark III that arrived on the scene much earlier. This much-advanced AF system features as many as 41 high sensitivity cross type sensors and five dual cross type sensors in the centre for increased accuracy and precision. The joystick and the rear of the camera is used to position the AF target and should you venture away from the central AF target and want to return to the centre very quickly, you can simply depress the joystick to do so. The great news for photographers who shoot regularly in the portrait orientation is the addition of a portrait AF joystick. Listening to feedback from previous 1D users, Canon has positioned this new AF joystick just below the scroll wheel and it saves the long reach you once used to make with your thumb when repositioning the AF point in portrait mode. 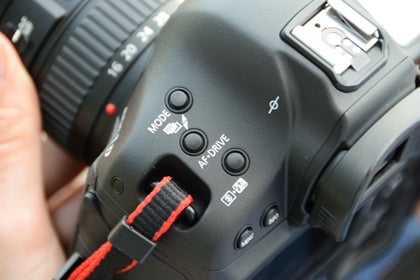 As for the grip it’s as chunky as you might expect from a pro-spec DSLR. The hand wraps around the grip very comfortably and the thumb at the rear rests in a perfect position to quickly access the scroll dial, AF joystick and Live View button. The rubber that’s used for the handgrip feels identical to that used for the EOS 5D Mark III, giving it a more clingy feel that some previous Canon DSLRs. Switching between landscape and portrait mode, the EOS 1D X feels as comfortable in the latter orientation as it does in the former with all the buttons you need perfectly aligned underneath the thumb. 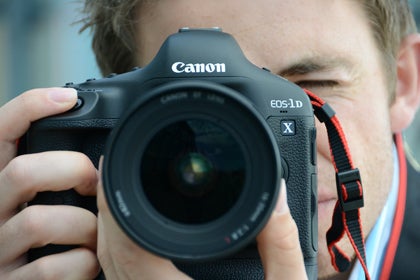 At the side of the EOS 1D X there’s a multitude of ports. These range from an Ethernet port that allows for fast and easy transfer of images directly to a PC or network, to HDMI output and a 3.5mm mic port for attaching an external microphone when recording HD video. Giving you the option of recording 1920×1080 HD video footage at 30,25 or 24fps, there’s also the option of 1280×720 at 60 or 50fps, with a maximum record time of 29mins, 59secs. 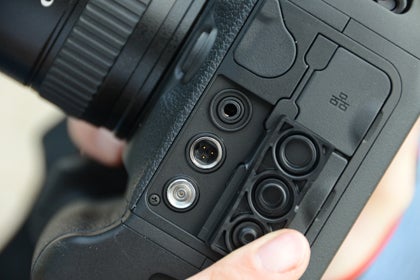 First impressions of the 3.2in, 1040k-dot Clear View II LCD screen are first class. Clarity, sharpness and colour couldn’t be faulted after reviewing our first few test shots. Just like the EOS 5D Mark III, you’re required to hit the magnify button once before using the top plate scroll dial to zoom into your images – something we didn’t like on the 5D at first but got used to over time. Another similarity between the EOS 5D Mark III and the EOS 1D X is the menu system. Very similar in terms of appearance, the colour coding breaks the menu down so it’s very quick to navigate and find what you need when you need it. 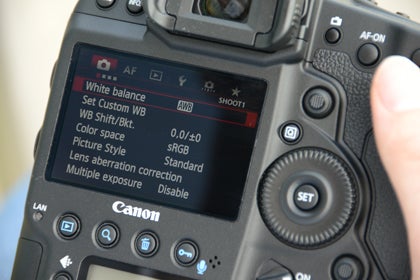 Elsewhere the EOS 1D X relies on a 100,00 pixel RGB AE metering system which runs alongside a DIGIC 4 processor to ensure highly accurate exposures in complex lighting situations are achieved.

The 1D X is quite clearly a camera that’s designed to appeal to all advanced photographers, whether they’re in search of high resolution or high-speed, or equally both. We can’t fault the camera from our first impressions and it feels just as good as the £5299 (body only) price suggests. Will the quality of the images and the performance impress us as much as our early thoughts? We like to think so and you’ll be able to find out in our full What Digital Camera review very soon.