A remote control helicopter complete with mounted camera - What Digital Camera gets a hands on with the DraganFlyer X6.

It’s not often you’ll find a Panasonic Lumix LX3 safely flying above your head, but the DraganFlyer X6 is a specially designed radio controlled chopper that changes that – its payload is a specially adapted camera (the LX3 is one of a number of possible configurations) that’s been reworked to allow for user control via remote up to an incredible 8000ft. Of course a specialist product such as this doesn’t come cheap, but then you will get a whole lot of bang for your buck.

The helicopter itself is a highly sophisticated bit of kit, with 11 sensors to maintain optimum stability, it’s possible to set a fixed altitude which the DraganFlyer X6 will adhere to – leaving you the freedom to take charge of the photographs. All the controls are mightily simple and the easy to use remote control has a swanky, bright OLED screen too. Included in the package is the X6 helicopter airframe, GPS for accurate positioning, a specially adapted Panasonic Lumix LX3, handheld controller with video receiver, battery charge station, transport case, tool box, wireless video receiver base station and software – though you’ll need to provide your own laptop or computer. As well as the manual, two days training is included to ensure you’re entirely confident at the controls. 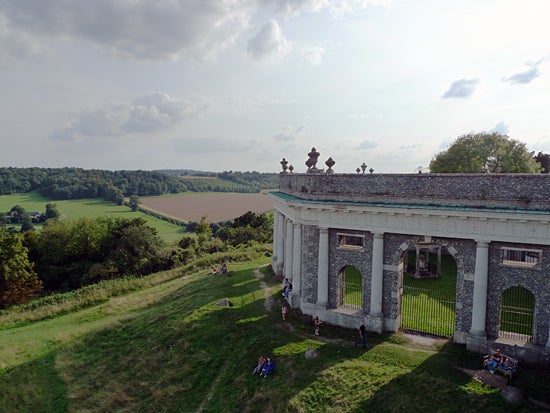 The DraganFlyer X6 helicopter allows you to acheive shots using the specially adapted Panasonic Lumix LX3 that would be otherwise next to impossible.

The adapted Panasonic LX3 provides a real-time live view image to the ground, and allows for shutter and zoom control via the controller. The camera has to be specially modified however, so it’s not possible to pair just any camera with the X6 – plus there is a 500g payload limit. There are other configurations that can be purchased in addition – such as a 1080p HD video camera, low-light camera and even a thermal imaging video camera. When What Digital Camera went to test out the DraganFlyer X6 we were very impressed with its ease of use. Whilst its application may at first seem somewhat limited, there’s actually a great deal of practicality in shooting bird’s eye views of weddings, golf courses and many other subjects. And how many other photographers have the kit to enable them to do just that? More specialist use could even see thermal imaging cameras mounted for use for police, bomb squad or environmental companies. The scope is huge – as is the price: at £21,585 without VAT it doesn’t come cheap, plus there are flight regulations in the UK that restrict where and how high you can fly. A very specialist product, but in the right hands the perfect tool to produce high quality, high-flyer shots without the need to hire a whole production company! And, it has to be said, it was more than a lot of fun to play around with… Watch this space for larger future versions that can carry larger adapted cameras; imagine the possibilities with a pro-spec DSLR a few hundred meters in the air.

For further information, enquiries and orders, visit the UK’s only distributor: www.air2air.com