Canon has revived its acclaimed S series of enthusiast-oriented digital compacts with the introduction of the Powershot S90. The S90 could best be described as a scaled down Powershot G11, featuring the same sensor and much of the functionality but in a more pocket-friendly form.

A major focus of the S90 is low-light photography. Its 10 megapixel CCD sensor and enhanced DIGIC 4 processor have been optimised for use in low light, it boasts a bright f/2.0 wideangle lens, a Dual Anti-Noise system for high quality images up to ISO3200 and a dedicated low-light mode which can shoot at up to ISO 12800 at 2.4 frames per second at a reduced 2.5 megapixel resolution.

An important innovation on the S90 is the addition of a new lens Control Ring, a click-stop ring around the base of the lens which enables photographers to control one of a number of user-selectable image parameters. In aperture priority and manual exposure modes the ring handles just like the traditional aperture ring on lenses of old, with a visual indication of the settings displayed in a scrolling window on the rear LCD screen.  The ring can also be set to control the shutter speed, white balance, ISO, Exposure Compensation, zooming and manual focusing.  A second input dial on the back controls the shutter speed in manual mode as well as numerous other parameters, and enables users to quickly scroll through images in playback mode.

The Canon S90 boasts a bright 3inch high resolution (461k dots) LCD display featuring Canon’s premium PureColor II technology, but no optical viewfinder. The 3.9x optical zoom starts at a useful 28mm wideangle, with a maximum aperture of f/2.0–f/4.9, and is coupled to a 4 stop optical Image Stabiliser to minimise camera shake. With such a high specification feature set enthusiasts will be pleased to learn that the S90 also offers Raw format shooting, with support for Canon’s Digital Photo Professional (DPP) software.

The Canon Powershot S90 will be available from October at a UK RRP of £449. 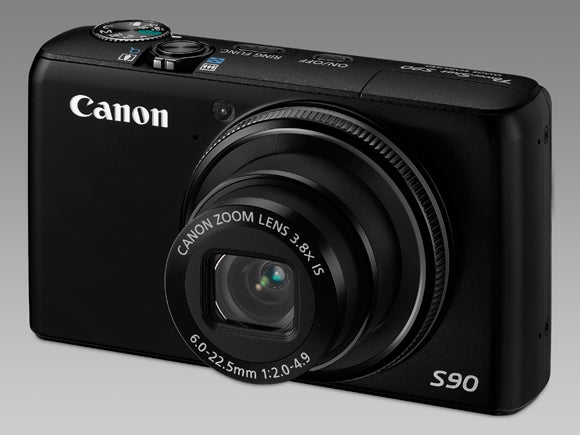 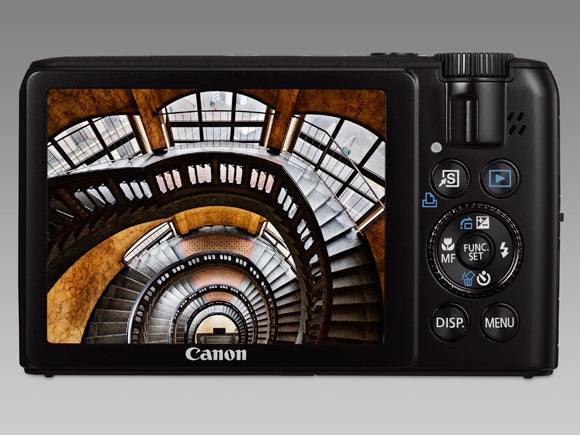 The Powershot S90 is the first S series since the S80 was discontinued in 2006 and is Canon’s attempt to offer high end compact buyers a smaller alternative to the G series, in order to counter the threat posed by Panasonic’s excellent Lumix LX3. In fact the S90 is not dissimilar to the LX3 in size and styling, but does offer on paper a couple of distinct advantages.
Firstly, the lens control ring is a triumph. Any reader who has ever used a traditional SLR with an old fashioned aperture ring will know what an excellent input method this is: quick, intuitive and strangely satisfying. The S90’s ring offers a very similar experience but with the additional advantage of being able to control a variety of parameters, including the focusing.
Secondly, Canon’s attempt to address the issue of low light photography is laudable, since a high percentage of photos are taken indoors or in otherwise dim lighting. It remains to be seen how effective the S90 is in this area.
Overall the S90 looks likely to be a formidable camera and a welcome return for the superb S series. (Why Canon ever discontinued this series in the first place is a mystery to us.) We look forward to reviewing a full production sample in due course.

Watch our preview video of the Canon Powershot S90