We take a look inside Steve’s kit bag…

£8600 I carry two camera bodies, one of which is a Mk III – my biggest fear has always been that I go on a trip costing a lot of money and all my equipment breaks down. It has a much larger screen on the back than previous cameras, which makes it easier to work with particularly in bright sunlight. The 21MP sensor is also much larger than previous versions, which allows you to crop in without losing too much resolution. It’s a very responsive camera with regards to coping with high ISOs. If there’s one area the camera could be improved it would be its weight – it’s tough to make something that needs to be rugged and light as well, but they are getting lighter.

£830 I use this lens specifically for underwater work. I do occasionally use it on dry land, but though the characteristic distortion of a fisheye is quite an interesting effect it’s not something I tend to go for in most of my work. But underwater a fisheye is essential because the distortion is minimised as water refracts light differently, making it ideal for capturing larger subjects.

£620 I primarily keep this as a spare lens in case the 16-35mm fails. Being a prime lens it’s optically a bit better. Although zoom lenses have been improving in quality to such an extent that I’m not really bothered by using a wideangle zoom.

£1690 Canon used to make a 17-35mm but this replaced it. This is the second generation and the optics have been improved quite a lot. Although I carry a 24mm prime, I don’t use it that much, preferring this lens. At 16mm you have quite an extreme wideangle.

£1450 I use this lens more than any of my other wideangle lenses because it’s not too wide and also because it offers me a 50mm focal length, which most closely approximates the human eye (if using full-frame 35mm sensor). It’s an ideal lens when photographing people and wildlife in close proximity and you can also zoom out to 70mm, which is good for portraiture.

£7800 £1640 This is a fairly lightweight lens that makes it good for handheld use. Because it’s light you can track things. At 300mm it’s a good mid-range telephoto lens for wildlife use.

£540 Speedlites are synchronised with Canon’s cameras and lenses and are quick to use. Generally I use them for fill-in flash – you can deliberately under-flash, say if you just want to bring a bit of sparkle to the eyes. I like to use natural light with just a tiny bit of flash, but indoors I use various bounce devices as it’s quite powerful.

From  £270 I always take a carbon tripod with me in the field because they are very, very lightweight and very strong. Although I’m finding with digital that with the ability to up the ISO and use image-stabilising lenses I’m using tripods less and less.

From £360 Although I have my notebook computer which I can download my images to, I store my images to a second device just in case.

Around £60 I mostly use 8GB cards. The EOS 1ds takes both CF and SD cards, but I’ve always used CF cards, simply because they used to hold more data. That is changing now as SD cards can hold about the same amount of data. The very first cards were half a gigabyte.

From £329 I started off using PCs, so I’ve stuck with it as I’ve upgraded because switching to Mac has certain cost implications. I may be quite unusual in this respect but I find doing graphics work on a PC fine. I use Adobe CS4 for all of my images and book publishing work.

From  £70 The Lacie Rugged is small and lightweight, holds masses of data and is quite tough too. I can bung my images on it and make a third backup of everything. 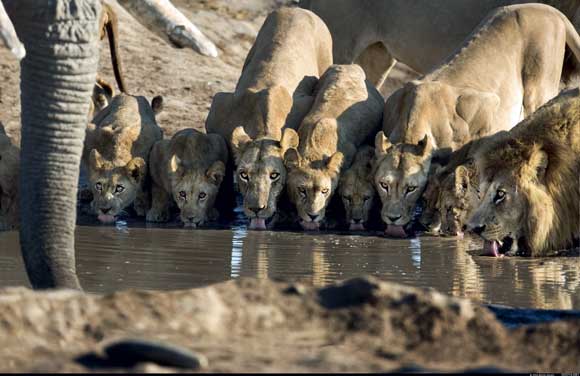 Lions, Botswana – ‘The lions had to drink quickly; they had killed an elephant the night before and the elephants were quite angry and hogging the water hole.’ Canon EOS 1D Mk II. Canon 500mm IS. 1/500sec @ f/11.