After a short summer break, the lenses 'blog is back to answer the persistent

First let’s clarify the term “prime lens”, which means a lens that has a fixed focal length: this is in contrast with zoom lenses, which offer a range of focal lengths. Secondly, it may be useful to have a copy of this month’s (September 2010) What Digital Camera magazine alongside you because the example cited in this debate draws on testing that was undertaken for this month’s report. 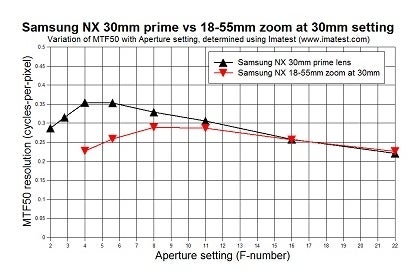 
Clearly, if flexibility is the main requirement then a prime lens must miss out on account of its ability to capture only a single angle-of-view. But there is another way of looking at “flexibility” that considers the range of conditions under which a lens can be used and this favours a wide aperture range, which is generally a prime lens advantage. Small aperture settings are less important because they are often associated with degraded resolution (owing to diffraction effects, discussed in an earlier ‘blog entry) so a wide aperture range really means a wide maximum aperture. Here is where prime lenses triumph, so perhaps even the “flexibility” battle is more evenly matched than might first have been thought.

Next comes cost. Zooms are almost invariably more expensive than any prime lens that sits within the corresponding zoom range, so this looks like a prime lens victory. Here too, however, there is a different way of answering the same question. Suppose that rather than pitching one prime lens against one zoom, we look instead at all the common prime lenses that the zoom covers: in this case it is very likely that the zoom will be less expensive than all the primes put together.

Finally we might want to consider image quality. It is easier to design a high-quality prime lens than to offer the same quality across a zoom range so the quality court is likely to be dominated by prime lenses. This does not mean that there are no high-quality zooms (in fact the latest generation of zooms is very much on a par with the quality of prime lenses) but in general a prime will outstrip a zoom for image quality.

The accompanying MTF graph illustrates this fact and very clearly shows that if you buy a Samsung NX camera then you might well want to purchase the system’s 30mm f/2 prime lens to use alongside its 18-55mm zoom.