Yesterday I was given the opportunity to do something with a camera I'd never done before - attach it to a telescope.

I was a guest of the Sussex photo retailer Park Cameras, and Swarovski who, I discovered, are one of the world’s leading telescope manufacturers. And I thought they just made crystal animals and costume jewellery.

It seems I’m not alone in my ignorance, because the guys from Swarovski were at Park Cameras to raise awareness of their optical products within the photo community, and to demonstrate their benefits. Swarovski telescopes are, I’m told, at the upper end of their market, in territory shared with Leica and Zeiss, which makes them more suitable for attaching to cameras than some of the more budget models.

Now I thought that the whole cameras-on-telescopes thing was called digiscoping, but it turns out that that’s only if you butt a camera with its lens against the eyepiece of a telescope. Often done using compact cameras but the increasingly with DSLRs too, digiscoping gets surprisingly good results but not as good as when you take the lens off the camera and attach the body directly to the telescope. This is imaginatively called ‘telescope photography’ and it’s what we were doing.

To try out the technique for ourselves I and several other curious newbies were driven to a lake in deepest Sussex and bundled into a hide, on what felt like the coldest day in England since the Ice Age. The STM 80 HD telescopes we were using have a focal length of 800mm. Mine was attached to a full-frame Canon EOS 5D Mk2 (via the TLS800 adaptor) but if you use a camera with an APS-C sized sensor your 35mm-equivalent focal length would be around 1200mm. There’s no variable aperture (its fixed at f/10) and it’s manual focus only, but the advantages over an 800mm lens are in its size, weight and price. The STM 80 HD is small and light enough to balance, with the camera attached, on one hand, whereas an 800mm lens would be considerably bigger and heavier. And while a STM 80 HD set up isn’t cheap – you won’t get much change out of £2500 – a comparable lens would most likely cost you double that. 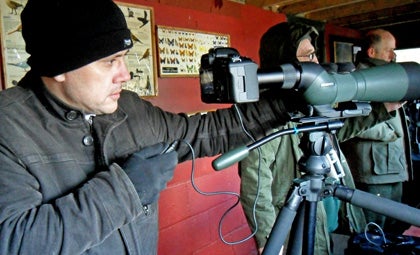 Framing up on the Sussex bird population using a Swarovski telescope

As well as my first time using a telescope, this was also my first time in a hide, and my first real attempt at bird photography. If you haven’t tried it let me tell you, it isn’t easy. Okay, the ducks and pheasants were pretty easy targets but there was a feeding station near the hide and I was trying to capture one of the numerous tits that kept flying to and fro. I thought my kids were hyper, but these little birds never keep still for a moment, and they move as quick as lightning.
Depth of field is minimal so you have to be spot on with the focusing. The best technique is to pre-focus on a twig where you know they’ll stop, then when one of them lands, let rip with the motordrive. Although it was in the middle of the day I was still shooting at ISO 1600 to get the shutter speed over 1/1000sec, and even at this speed a few of my shots were spoiled by motion blur.

Left: Focusing was a challenge   Right: Timing is everything

One lesson I did learn was the value of Live View mode for shoots like this. Much derided by many enthusiasts when it first appeared on DSLRs, its main benefit here is that it avoids both the noise and camera-shake inducing vibrations that you get from the mirror slapping up and down.
At the end of the shoot I left frozen into a Nigel shaped ice cube, but with a new respect for bird photographers. Those guys must have the patience of saints and the reflexes of houseflies to get some of the shots we see in the WDC office. 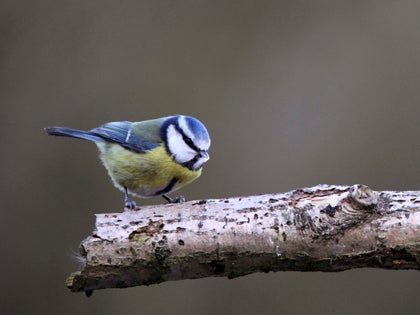 Above: Success, at last!

My shots were pretty feeble by comparison, though the sharpness and detail visible in the few shots I managed to get in focus did hint at the potential optical quality achievable from these telescopes. The experience made me think about the role that telescopes can play in this area of stills photography, and I’ve pencilled in for later in the year a comparison test against a proper 800mm lens to see how they fare.