Does the latest move towards sub-miniature (Micro Four Thirds) cameras suggest a lowering of lens and focusing standards? Not if my experience with Panasonic's Lumix G1 body and its matching Lumix G 20mm lens is anything to go by!

Towards the end of last year I commented on an apparent difference in focusing accuracy when different AF sensor areas are used in dSLR cameras. At the time I reported having seen this problem to some extent or another using the Sony Alpha-900, Nikon D80, Nikon D700 and Pentax K200D; only the Canon EOS 40D escaped unscathed.

I pointed out that this might just have been a fluke set of results but I also pointed out that the different sensitivities of different AF areas is well known. In the case of Canon’s EOS-40D the Instruction Manual announces: “The centre AF point’s sensitivity to vertical and horizontal lines is about twice as sensitive as the other AF points.” I also promised to publish an update on my investigations in due course.

As it happens I have just been testing a sextet of Micro Four Thirds lenses with a Panasonic Lumix G1 body, the results for which will appear in the May 2010 edition of What Digital Camera magazine. At the same time I decided to check the Lumix G1’s AF system by pitching images captured using the central focusing area against those captured using automatic AF area selection. As an aside, it was interesting to see that despite the subject being a static test chart, the AF areas that were automatically selected by the Lumix G1 differed slightly in some of the frames but almost invariably did not include the central area!

In order to have some sort of consistency comparison I also recorded a set of MTF data for the Lumix G1 using ISO200 for central-AF operation (the AF comparison having been conducted at ISO100). This means that the two identical focusing methods used at ISO100 and ISO200 can be compared with the two identical ISO settings used for central-AF and automatic AF area selection. If only one of these comparisons shows a difference then that would indicate this factor has a significant effect on the Lumix G1’s image quality whereas if both vary then neither is probably more important than the other (and the camera is not capable of producing consistent results across these settings). 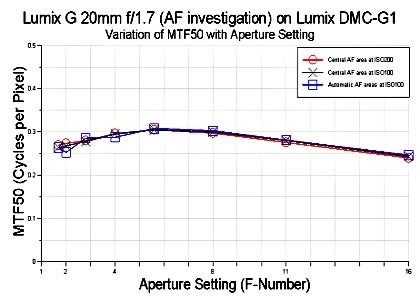 The good news is obvious from the graph: consistency is very high indeed. Despite being small the Lumix G1 is clearly a competent camera body. It also produces images that are subjectively very pleasing indeed. The lenses are a bit on the pricey side but the Lumix G1 is well worth a look if you would rather carry a smaller and lighter camera bag than would be necessary for the equivalent dSLR.

The only downside to the Lumix G1 is that pesky electronic viewfinder, in which I sometimes see multi-coloured images that suggest consecutive display of red, green and blue colour components (as is also the case for some digital projectors). That, however, is a totally different issue.