Augustin-Jean Fresnel coined the word u201cetheru201d as the name of the medium through which light was expected to travel in the mid-nineteenth century but he also invented those weird-shaped Fresnel lenses that bear his name. Hereu2019s how they work. 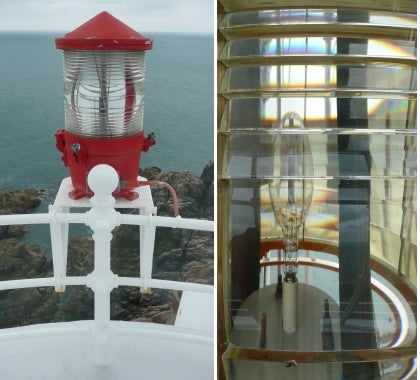 The photographs above show Fresnel lenses in a small marker light and the main internal optics of La Corbiere lighthouse off the south-west coast of Jersey. Photographs (c) Jon Tarrant.

Even in the era of GPS, lighthouses remain important markers on the boundary between the land and the sea. Crucial to their success is the ability to project a beam of light as far as possible (before the curvature of the Earth renders the lighthouse invisible) and the best way to do that is using a lens. Clearly the lens needs to be very large but that would also make it very heavy were it not for the genius of Augustin-Jean Fresnel.

Fresnel made his name as a physicist by contributing to the theory of light as it unfolded in the early years of the nineteenth century and in 1820 he unveiled his Fresnel lens design specifically for use in lighthouses. His genius lay in realising that the purpose of a lens is to bend light and this only occurs at the surfaces where there is a boundary between two different materials (air and glass) so the mass of glass that resides within a lens is simply “dead weight”. Fresnel therefore designed a lens in which most of the inside glass is removed and the outside surface is collapsed, step-like, into the space that is left.

The end result is a lens that is almost flat, with a smooth centre area surrounded by a series of triangular steps that become progressively steeper towards the edges.

You might be tempted to ask whether this same technique could be used to make camera lenses any smaller and lighter than they are currently. The answer is no, but the reason may not be entirely obvious.

When light passes through a lens it is not only refracted (bent) and dispersed (the colours are separated) but also it carries with it information about the geometry of the optical system. The best-known example of this is the polygonal out-of-focus highlights that are sometimes seen in the background of pictures and which owe their existence to the shape of the lens aperture. The step-like surface of a Fresnel lens would have a similar effect not only in out-of-focus areas but also across the sharply-focussed image as well, totally degrading the picture in the process.

That isn’t an issue when only light is being projected, rather than an actual image of the lamp within the lighthouse, but clearly it is a major flaw as far as photography is concerned. That said, Fresnel lenses are used to focus photographic lights so they still have their uses in a studio – but not within a transmission system that is used to record high-quality images.