It is one thing to test a lens but what effect does the host camera body have on the results? A new website from DxO Labs, DxO Mark, reveals some of the answers.

The name of DxO Labs should be familiar from DxO Optics Pro, which is a top-quality image analysing and optimising suite. Such software has become necessary because the standardisation that used to exist when film ruled the roost no longer applies in the digital era today.

In days of old, lens testing was commonly done using a standard b&w film (Kodak Technical Pan) processed in a standard developer (Kodak Technidol LC) to give a standard negative quality. Things are not so simple in the digital world because the “film” is now a sensor, and different cameras use different sensors: there is no option to load a standard film and test the lens under standard conditions.

As a result, there is no escaping the fact that the host camera body must surely have an effect on any lens tests that are conducted using it.

I think that I may have been one of the first journalists to explore this problem and to publish an investigation that tested the same lens on different camera bodies – an approach that was made possible by choosing a Sigma lens that was available in a range of different camera mounts. On that occasion the Sigma lens was found to perform best on a Sigma dSLR, quickly followed by high-end Nikon and Canon bodies. The budget Nikon body produced good results but the budget Canon was clearly last in the quality rankings.

Performing such tests is both very time-consuming and also difficult in terms of securing a range of lenses and camera bodies at the same time. Unsurprisingly, therefore, I haven’t ever repeated the test in as much depth as I did in 2006. Luckily, DxO Labs has just come to the rescue with the launch of its new website (www.dxomark.com) which reports data obtained from raw-file testing of more than 500 combinations of lenses and camera bodies.

The graph shown below is an example of the wealth of information that the website contains, plotting the Peak Score of lens-and-camera combinations against the indicative price (in US Dollars) of the equipment used. In general, the higher the value of the kit tested, the better the results that are recorded. Interestingly, the bottom-left corner of the cluster, which corresponds with low scores and low values, includes a number of lenses fitted to the same budget Canon body that fared somewhat poorly in my own tests four years ago. 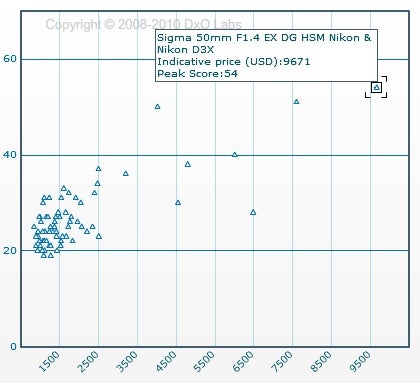 Taken from the DxO Mark website (www.dxomark.com) and showing Peak Score (vertical axis) against Indicative Value in US Dollars of the kit tested (horizontal axis). This particular graph displays all of DxO’s tests conducted using Sigma lenses, with the highest score (and highest price) having been secured by the Sigma 50mm f/1.4 EX DG HSM attached to a Nikon D3x body. Encouragingly, this particular lens also scored very highly (97%) in my own What Digital Camera tests.


Regrettably, the 30mm f/1.4 that I used appears not to have been tested by DxO but the full-frame equivalent 50mm f/1.4 comes top of the Sigma rankings when fitted to a Nikon D3x, with the same lens on a Canon EOS 1Ds Mk-III and a Canon EOS 5D Mk-II in second and third place, rapidly followed by the Nikon D3s and Nikon D3.

Many, many hours could be passed away scanning the results reported on the DxO Mark website and doubtless many camera-club discussions will focus on the rankings that are revealed. For the record, the current king-of-the-tree is Canon’s EF 85mm f/1.8 USM fitted to an EOS 1Ds Mk-III, which scores 61 with an indicative value of $7479. The same score has also been awarded to the Nikkor AF-S VR 70-200mm f/2.8G IF-ED fitted to a Nikon D3x but this combination is valued at $11022.

Right behind, sharing a score of 59, are the Canon EF 85mm f/1.8 USM fitted to an EOS 5D Mk-II, valued at $3899, and the Nikkor AF 85mm f/1.4 IF fitted to a Nikon D3x (valued at $10402). In fact, depending how you weight cost against performance, there is even a case for saying that the Canon 85mm/5D combination is the best overall pairing. Why not visit the website and draw your own conclusions?