A friend who works in IT likes to warn against the dangers of making assumptions: “assume,” he points out “makes an ass of you and me”. It’s a poor pun (ass u me) but it’s an important truism that reared its ugly head in the latest batch of lens tests that I’ve been doing.

Normally when I’m photographing test charts I align the camera with the target area, using a central mirror, and then secure the chart in its frame. Yesterday, after I had obtained some slightly suspect resolution figures, I wondered if the test charts weren’t being held perfectly flat so I decided to fix a small mirror against the front of the chart as well. The problem was that this meant I couldn’t use the central AF area to focus the camera so I switched to one of the immediately adjacent areas instead.

For four of the five cameras I was using this resulted in consistently lower resolution figures and for only one camera did it produce no degradation. The Canon EOS-40D was the hero, trumping the Sony Alpha-900, Nikon D80, Nikon D700 and Pentax K200D. Of course it is possible that this was just a fluke set of results (although the Canon came top with all three lenses that it was being used to test, which seems a bit more than just a coincidence). Needless to say, I will be examining this effect in more detail as soon as time permits.

If this effect turns out to be real then it will have important ramifications because it means that photographers are likely to get sharper results if they use the central AF area and then reframe the image when an off-centre composition is required. This is important for me because I happen to be very fond of off-centre compositions and yet it isn’t always practical to focus centrally and recompose afterwards – the photograph below being a good example of an occasion when the central AF area is clearly not the right one to use! 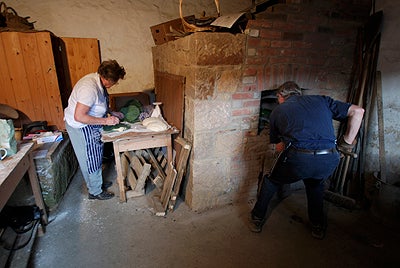 You can frame an off-centre composition either by using an off-centre AF area or by framing centrally then recomposing using the focus lock. Preliminary testing suggests that the results obtained from these two techniques may differ. This picture shows the making and baking of Jersey Cabbage Loaves. Photograph (c) Jon Tarrant.

It is well-known that the AF areas within a viewfinder are not all equally sensitive. In the case of Canon’s EOS-40D the Instruction Manual announces: “The centre AF point’s sensitivity to vertical and horizontal lines is about twice as sensitive as the other AF points.” This difference is not unusual but the text goes on to refer to the maximum lens apertures that are required to activate each type of AF area and there is no suggestion that the accuracy of focussing, rather than the ability to focus, may vary.

As I wrote above, this may turn out to be a fluke set of results and maybe there is nothing to be worried about but I will certainly be looking a lot closer as this issue and in the meantime I would be very interested to hear from anybody else who has identified a similar problem.