Given the pace of change within photography, it’s all too easy to take even the most basic compact for granted. Yet 15 years ago compacts were just breaking through the 1-megapixel barrier and most didn’t even have LCD screens. Nowadays, eyebrows are raised if a DSLR doesn’t feature HD Video recording.

Today’s digital cameras are an accumulation of different technologies that have been introduced, honed and perfected over the years. Manufacturers who break a feature into a market won’t necessarily be the ones who end up presenting it in its most refined and usable form, but each step of technological progress encourages others to do something bigger and better. Some cameras have had a bigger impact than others, be it due to a technical innovation, a different mechanical construction, or simply a lower price point, and it’s these we celebrate over the following pages. So, to whom exactly do we owe a debt of gratitude? Let’s find out… 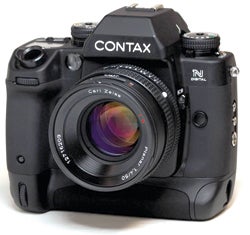 FIRST FULL-FRAME CAMERA
Contax N Digital
Contax’s N deserves a place in history as the first full-frame DSLR to make it to market, though its delay and short lifespan have equally contributed to its legacy. The camera was first announced in 2000, but only saw the light of day two years later.

It featured Contax’s N mount which the company had used on its previous film SLR model, with optics from Carl Zeiss adding to its appeal. Sadly, while the lenses were highly regarded the camera was not, and just over a year later it was withdrawn from sale. Contax itself pulled out of the photography market altogether a few years later, though not before other manufacturers had jumped onto the full-frame bandwagon to finish what Contax had started. 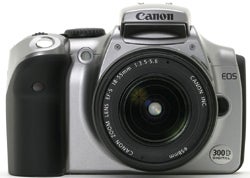 FIRST DSLR UNDER £1000
Canon EOS 300D
New technology will always fascinate and encourage debate, but if it’s priced out of reach for most people there is only so far it can go. Canon’s EOS 300D is perhaps best remembered for being the first DSLR to be priced beneath the £1,000 price barrier, thus bringing it down to a wider audience.

Much of its feature-set had already been included in the preceding EOS 10D, though its arrival started the price wars which ensued from various manufacturers. Nikon was the first to respond with the D70, followed by Pentax’s *ist DS and Konica Minolta’s Dynax 7D, culminating in affordable recent entry-level models like the Nikon D3000 and Canon EOS 1000D. 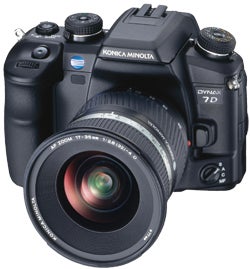 Konica Minolta Dynax 7D
Konica Minolta had already implemented sensor-based Shake Reduction in a compact by the time the Dynax 7D
was released, but nevertheless it became the first of many DSLRs to sport the technology.

An alternative to the already established lens-based stabilisation, the system used motion detection in the camera’s body to detect movement, before shifting the sensor to compensate. Sony continued with the technology when it took over Konica Minolta’s imaging division, and has since incorporated the system into its own Alpha range of models, just as other manufacturers have done the same in both their own DSLR and compact lines. 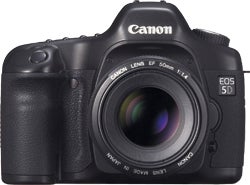 Canon EOS 5D
Further showing how to deliver a highly specified product at a competitive price, Canon created a whole new category of professional DSLRs with the EOS 5D. By omitting the vertical grip typical of pro-models, the camera still offered a full-frame sensor and other professional trappings, in a body similar in size to enthusiast DSLRs.

The 12.8MP CMOS sensor was capable of producing a standard of images that was highly regarded among professionals. As such, it became the camera to have for those who needed to travel light, such as wedding, press and landscape photographers. As further proof of its popularity, it inspired the subsequent competition from Nikon and Sony, in their respective D700 and Alpha 900 models. 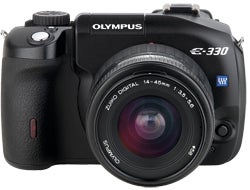 FIRST COLOUR LIVE VIEW
Olympus E-330
The traditional construction of an SLR had always been
a limitation for live view, due to the placement of the mirror and shutter. The E-330 worked around this problem by using a different arrangement of mirrors to direct light into the camera’s viewfinder, on to a sensor that provided the camera’s live feed.

Although quite revolutionary, this wasn’t actually the first time we had seen live view on a DSLR, as Fujifilm’s S3 Pro model had offered a more basic option, albeit for only 30 seconds at a time and in black and white. Live view has since become a standard feature
on DSLRs, and the natural precursor to video capture, which
is becoming just as settled in a DSLR’s specification set. 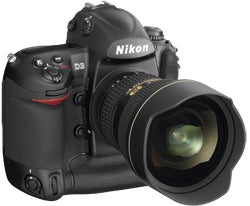 LANDMARK PRO CAMERA
Nikon D3
Showered with praise and acclaim, Nikon’s D3 has spent the past two years as many people’s dream camera. Its arrival as Nikon’s first full-frame DSLR introduced a number of new technologies and radically improved upon others.

Nikon’s brave decision to turn its back on the pixel race and arm the D3 with fewer (just 12MP) but bigger pixels gave it groundbreaking low-light performance, and the ability to shoot at the hitherto-unheard-of ISO setting of 25,600. Professional photographers switched to the D3 in droves, and the extension of the D3’s technology to the D3x, D3s and the smaller, cheaper D700 has transformed Nikon’s fortunes in the pro and high-end DSLR sector.