The Apple iPhone 4S is a significant upgrade over its predecessor, and boasts numerous improvements, but what does it offer for photographers? Nigel Atherton examines the camera and photographic features of the iPhone 4S

The camera on the iPhone 4S performs exceptionally well. It takes a couple of seconds to boot up but once up and running its significantly faster to use than not only previous iPhones but also many compact cameras as well. The screen on the 4s is the same as the 4, which is magnificent. All screens can be hard to see in bright sun but the Retina display is better than many in this regard. Focusing is quick and accurate, and the focus point is indicated by a square on the screen. If you don’t agree with where the camera has chosen to focus you can tap on something else in the frame and it will lock onto that instead – even following it if it moves around.

Taking a picture, either using the real or touch screen button, happens without any discernable shutter lag and processing time is almost instant – its possible to achieve two frames per second just by pressing the button. As with previous iPhones the placement of the lens in the top corner may take some getting used to if you’re not used to it, and you may need to hold the phone differently to the way you would a compact camera to avoid blocking the lens with your finger.

Also although it’s great to have the option of a physical shutter release button, the volume control is not the ideal choice, being a little small and wedged between other buttons. A larger, dedicated one would be nice to see on the iPhone 5, when it comes.

Functionality is important, but it’s the final image quality that matters most and here the iPhone 4S comfortably exceeded our expectations. In good light pictures are crisp and detailed, even when viewed at 100%, with pleasingly punchy but not over-saturated colours. The lens is sharp and relatively free of distortion, while exposure and white balance generally perform flawlessly. Occasionally, with high contrast scenes beyond the dynamic range of the sensor, highlight detail can end up being sacrificed but it’s worth pointing out that, although there is no manual exposure control as such, you can effectively control the exposure by your choice of what part of the scene you tap on the screen. Tapping light areas will give you a darker result than tapping darker ones.

In lower light at the higher ISOs (the 4S seems to peak at ISO 800) noise creeps in but the film grain-like structure is relatively easy on the eye, compared with some cameras. The processor clearly does a great job of interpreting the scenes presented to it and turning out pleasing images even in tricky situations. 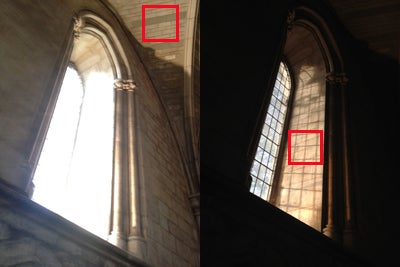 Above: You can affect exposure by tapping the image in the appropriate place. In this example the two shots are what resulted from tapping the areas within the red squares.

Apple reckons the iPhone 4S has the best camera ever produced for a mobile phone, and we reckon they might be right. It redefines what photographers can reasonably expect to get from a camera phone. The speed of use and quality of the results exceeds not only any other phone we’ve tried but also many cameras too. Based upon this test, compact manufacturers should start panicking now.