Canon’s IXUS range of compacts has always been suitably stylish and oh so svelte. The IXUS 125 HS is no different, providing strong design, build and specification – but is it style over substance? We find out.

£299.00
Canon’s IXUS range of compacts has always been suitably stylish and oh so svelte. The IXUS 125 HS (High Sensitivity) is no different with strong design and build joining a neat specification. But is it style over substance? We find out.

The IXUS 125 HS features a high-resolution 16.1-megapixel backlit sensor, though why you need that sort of pixel density on such a small snapper is questionable, given the likely use of the images shot by its target market, namely online, on social media sites or normal sized (6×4-inch) prints. However, focusing the light onto the sensor that creates those images is a very good 5x, image stabilised optical zoom lens giving a very usable focal range from 24mm at the wide end to 120mm at full zoom.

The 125’s key features – more or less – match most of its competitors within the entry-level compact marketplace, but I cannot help but wonder if the £229 pricing – significantly more expensive than competing entry level compacts (Nikon’s 16.1-megapixel, 5x zoom Coolpix L26 that sits on the shop shelf at around £99 comes to mind) – might hamstring it slightly? 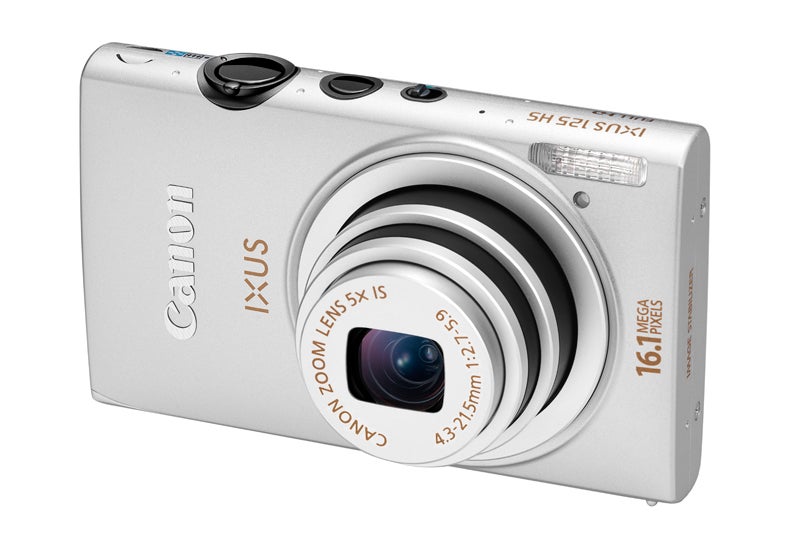 And while it may be that Canon’s IXUS models can hold a premium price point and if that is so, what else do you get that would make you part with the extra cash for that apparent IXUS cache?

For a start, the overall dimensions of just 93.2x57x20mm, mean the IXUS 125 HS will slip easily into the pocket of your suit or a handbag as easily camera bag and its weight of just 135g (with the memory card and battery inside) makes carrying it very easy indeed; the superb metal construction and solid build helping justify the cost perhaps?

That all-metal body; the softly rounded edges and slimness are indeed appealing; the silver livery is joined by red, pink, green and blue finishes, if those should take your fancy, while its flush set buttons add to its overall neatness; it certainly looks and feels very nice indeed.

I liked the switch on the top plate for changing the camera’s modes from full Auto shooting to Program AE, with the related menu options adjusting accordingly; a novice snapper can get cracking in real point and shoot fashion while a less novice user has more control options depending on the position of this switch.

A relatively large on/off button sits next to the shutter release and its associated surrounding lens zoom lever with the tiniest of flash emitters perched on the camera’s front corner (incidentally there’s no optical viewfinder, as you’d expect) but its position is too easily obscured by your left index finger when shooting. The flash’s output is very weak; the fact the camera can be used alongside Canon’s accessory HF-DC2 flash is welcome.

Controls on the back all sit flush with the body and are nice to use, a direct video capture button for Full HD 1080P video with mono sound is a great addition but the 125 only shoots at 24fps at the 1080P setting. Drop it to 720P and you get the smoother-looking 30fps rate to play with too.

The 125’s 1/2.3-inch CMOS backlit sensor is the key to getting the high sensitivity performance combined with Canon’s latest-generation DIGIC 5 processor; stills and video performance are all helped along nicely with colour, white balance and detail all very good overall.

The lens is a neat little optic and its 24mm wide-angle end is versatile for shooting everything from a large group at a party, say, to a landscape shot and the 16.1-megapixel sensor is capable (in theory at least) of recording plenty of detail.

The fully zoomed 120mm telephoto end provides scope for reasonably close crops and the overall combination of focal lengths makes this camera versatile. The inclusion of the image stabilisation is also great at the longer zoom end, where the small camera size can be an additional handling foible for when dealing with camera shake.

With that in mind, the camera lacks anything in the way of a handgrip, as it’s simply not big enough to house such a beast (and no doubt, it’d make it look uglier too) so the camera is quite slippery in the hand. Recessed buttons compound this, but at least it means you don’t accidentally activate things you don’t intend to.

There is room too for an HDMI port situated next to a USB/AV dock under a flimsy-feeling rubber flap on the side of the camera just above the wrist strap lug. In terms of power, the 125 comes with a rechargeable lithium ion battery that’s so slim I’m surprised it has enough oomph for anything more than few snaps. As it was, I got around 120-shots from a full charge with a few shots using flash; it seems image playback and reviewing video hits the power supply quite hard though and so must account for the discrepancy between my results and Canon’s claimed 180-shot capacity. The battery sits next to the SD/SDHC/SDXC removable media card slot under a flap under the body; there’s no built-in memory provided however. 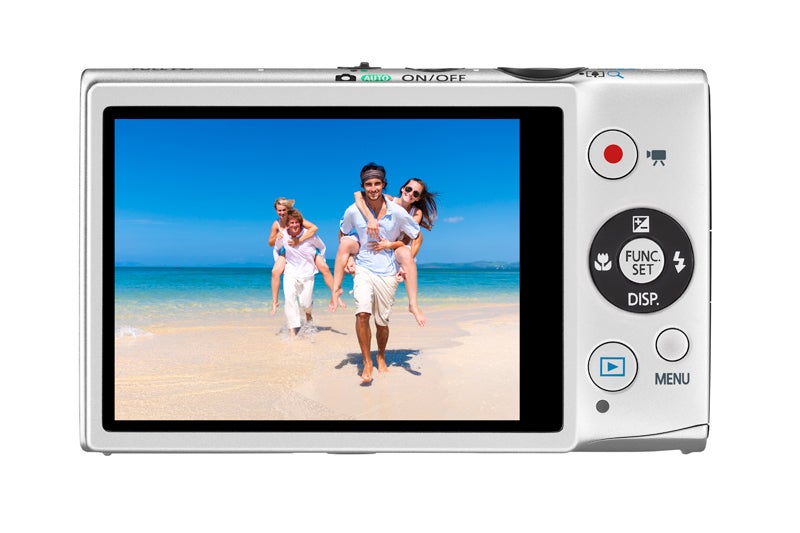 In terms of using the camera, the slippery feel is the one main demerit but the controls are straightforward to use with menu options displayed clearly on the large, 3in 460k-dot colour display; itself rather good to use in all but the brightest of conditions.

A press of the centrally placed FUNC(tion)/SET button, within the four-way jog buttons (which activate flash modes, macro shooting, exposure compensation and display settings) switches on the relevant shooting adjustment menus for the mode selected (Auto or Program) via the top plate switch.

Everything of key import, such as resolution, image quality, white balance and sensitivity can all be got too here and also available are the 23-scene modes and other shooting options, such as Portrait, Movie digest and Landscape shooting modes as well as the Program setting and a host of the more usual scene settings.

One is the Movie Digest mode, where you get a short movie clip with audio interspersed with the still snaps you’re taking, so great to have for a days sightseeing watched back on TV but not so great for printing the images!

Other digital effects, such as the miniature effect are in there (incidentally a feature now seemingly used on every TV program currently broadcast on all TV channels) along with fisheye. There’s toy camera mode too with boosts for colour saturation or the reverse for black and white shots. There’s no panorama mode or 3D capture mode, both features that are appearing more and more on Canon’s point-n-shoot rivals.

When shooting stills, the lens can track through its full focal range in about a second and half, with an accompanying loud buzzing; when shooting video the speed of the zoom is reduced to help mitigate the electrical buzzing effect, which it does very well indeed. When recording video, the LCD crops the top and bottom of the scene to give the widescreen-a-like view ideal for flat panel HD TV’s

Focusing is pretty good for most subjects, though low light did cause issues on some shots but Canon has also included AF tracking for moving subjects, which worked rather well. Face detection AF is included too and it performs well enough. In the more “manual” Program mode, you get user control over metering, colour mode, white balance and ISO range, the latter running from ISO100 to ISO3200. This last setting however produces the noisiest images – as you’d expect – but not dramatically so.