Capable of shooting at up to 60fps, the Nikon 1 V3 will be released in April with a number of optional accessories including a detchable EVF

Described as a ‘superb step-up or secondary camera’, the Nikon 1 V3 is the first member of the 1 series to sport a tilt-screen touch monitor.

The 1 V3 also comes with Nikon’s hybrid AF system, meaning it boasts 171 autofocus point, 105 of which are phase-detection points.

The Expeed 4A processor allows the camera to capture Raw and Jpeg images at lightning speeds. The Nikon 1 V3 can shoot at up to 20fps with continuous AF, and can fire off 40 Raw-format images at up to 60fps with fixed focus.

The vari-angle 3in touchscreen has a resolution of 1037k dots. There are also a couple of programmable function buttons and a feature button that allows quick access to the main menu.

A number of extra accessories are available with the Nikon 1 V3. The GR-N1010 Grip provides the option for angled controls and a third programmable function button, and the new Nikon 1 DF-N1000 EVF offers near-100% frame coverage and 2359k-dot resolution. 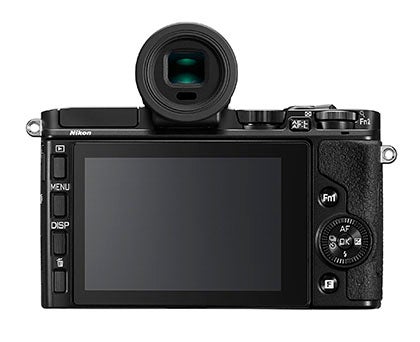