The Panasonic Lumix GF3 is Panasonicu2019s smallest, lightest and most affordable interchangeable lens camera yet, and WDC got our hands on one at its launch in Rome. Hereu2019s our previewu2026

Panasonic has expanded its Compact System camera range with a new entry level Lumix GF3. The camera slots into the GF range of Micro Four-Thirds compacts, alongside the GF2, but the GF3 is an addition, not a replacement, and will sit below the GF2 in the range to become the company’s new entry level model. At 17% smaller and 15% lighter than the GF2 the new GF3 is the world’s smallest and lightest interchangeable lens camera with a built in flash. (The Sony NEX C3 is very slightly smaller but lacks an internal flash). However, the reduced size comes at the expense of both the hotshoe and accessory port – so you can’t attach the accessory electronic viewfinder or an external flashgun. The Lumix GF3 does however include the company’s Light speed AF system as found in the recently launched G3, which Panasonic claims is the world’s fastest constant autofocus system, and the innovative Pinpoint AF system that lets users select a focus point from anywhere on the LCD screen simply by touching it in the desired place. The GF3 then focuses on that point and takes the shot within as little as 0.18 second.

The Panasonic Lumix GF3 is based around a 12.1MP LiveMOS sensor coupled with the high performance Venus Engine VII HD image processor. Like the GF2 the camera is controlled via a 3.0inch 460k dot touch-screen LCD screen that enables users to set all the camera’s modes and functions, as well as control the depth of field and select the focus point. A rotary control wheel next to the screen provides a further method of data input but gone is the thumwheel command deal featured on previous GF cameras.

As you’d expect the GF3 can shoot HD movies: at 1080i output at 25fps, with full time autofocus but only mono audio recording. The GF3 also features AF Tracking in movie mode, enabling it to lock onto and follow moving subjects during video recording. Video is accessed via a dedicated button on the top plate next to the still shutter button, and movie files are saved in the AVCHD format.

A new Intelligent Auto Plus mode which enables novice users to adjust the depth of field, white balance and exposure using a simple, jargon-free graphical interface. It also features Face Recognition, which can identify and prioritise friends and family members in your scenes, and Intelligent ISO Control which raises the sensitivity if motion is detected. For those who prefer to take control themselves the usual PASM modes are one touch away on the LCD screen.

The GF3 will be available in Black, White and Red in the UK, with Pink and Brown versions also available in selected other territories. 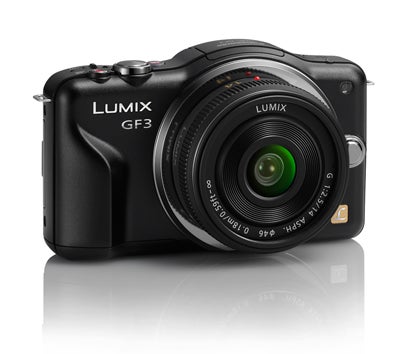 In Use
During a brief shoot around Rome with the GF3 at the European launch, the camera impressed with its speed and responsiveness. The camera offers a 4fps burst mode but more important is the speed of focusing and delay shot to shot during normal shooting and the GF3 appears able to handle moving subjects such as roller bladers, particularly when using the pancake or kit zoom.

The LCD screen is bright, sharp and visible from a wide viewing angle. It’s responsive to the touch and should pose no issues for anyone familiar with smart phones. Although very small the GF3 handles well, even when used with bigger lenses such as the 14-140mm and the 45-20mm that we also used. But it’s with the smaller lenses such as the 14mm pancake that the GF3 really comes into its own, enabling the camera to fit into an even smaller pocket than the GF2.

Advanced users may feel that the GF3 is a step backwards compared with the GF1 and GF2 and indeed in some ways it is. There’s no mode dial (a la GF1) no command dial for changing the exposure settings, no quick access to ISO, no hotshoe or accessory port – so the GF3 continues Panasonic’s trend of ‘dumbing down’ the GF series since it launched. But the camera is clearly aimed at compact users, in its size, design and lack of any complicated buttons or paraphernalia on the exterior. It’s designed to encourage those who may have gone into a shop to upgrade their compact to perhaps step up to something a bit better, and these users will feel immediately at home with the GF3, which will give them vastly superior image quality than they’d get from any compact. This strategy makes sense as long as Panasonic doesn’t ignore the needs of the enthusiast market, and doesn’t wait too long to introduce a more advanced companion model that includes the features that the GF3 lacks. 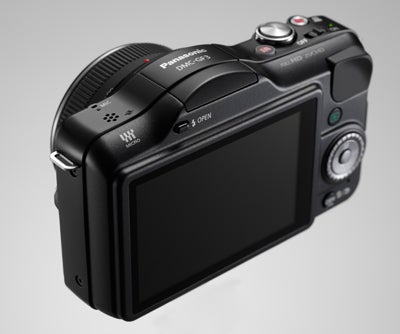 Highlights At A Glance

Watch the hands on Preview Video: