I spent several hours using a pre-production NEX-5 and came away very impressed at just how much Sony has crammed into such a small camera. In fact it’s so small that it looks a little odd with the zoom attached – like an Alpha lens attached to a Cybershot – and with the larger, forthcoming 18-200mm attached I imagine it will look like one of those little Remora fish that cling to the sides of sharks. With the 16mm pancake lens attached the NEX-5 looks more proportional, and more importantly I was able to put it into my Blazer pocket with ease.

It will come as no surprise to learn that the NEX-5 handles more like a compact than a DSLR, so those preferring a more DSLR-like experience, and a viewfinder, may favour the excellent, but larger Samsung NX10 or Panasonic Lumix G2.

Start up is somewhat slow, but once up and running the camera is a smooth performer, with fast and accurate AF that only faltered a couple of times, in very low light. The user interface, especially in the iAuto and Scene modes, takes beginner-friendliness to the next level, with plenty of on-board advice and help available from a single button press to those who need it.  The background de-focus control is especially good.

Where the camera falls down, from a usability point of view, is in the cumbersome button pressing and scrolling that more experienced photographers have to go through to change the ISO, White Balance and other image settings. This quickly became incredibly frustrating, and I found myself yearning for some kind of short cut button to these menus. This could possibly be addressed with a firmware upgrade, by adding the option to turn the soft key buttons into custom functions, though more realistically Sony may release a more enthusiast-oriented model (NEX-7?) with a couple more buttons. These are after all, just the first two models in what will grow into a much larger system.

The omission of a viewfinder was not a problem in overcast light, and there is an option to boost the LCD screen brightness and contrast for use in bright sun, but long-sighted users may still yearn for something they can put to their eye, like the rival Samsung NX10 and Lumix G2/G10, and the option of an electronic viewfinder attachment for use with the zooms would be an appealing addition.
Or perhaps Sony will introduce a slightly larger DSLR style model featuring a built-in EVF in the future. 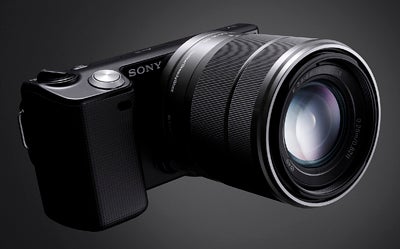