Image: The new two-in-one LightRight, seen here attached to a DSLR. When the lights are off, the flash bounces and diffuses off the circular panel.

Video functionality on DSLR cameras is getting better and better, but video and photo have different lighting requirements and if you like to shoot both then it’s easy to find yourself frequently swapping accessories.

With its new campaign on IndieGogo, ColorRight seeks to change that. LightRight, its new product currently up for crowdfunding, is the world’s first two-in-one LED array and photo flash diffuser. 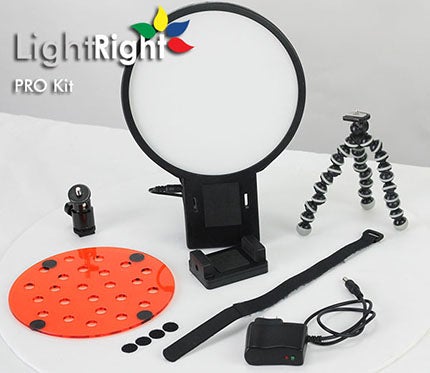 Image: The LightRight ‘Pro’ Kit, which comes with a few more accessories than the regular version

LightRight is a thin LED array that attaches via a camera’s hotshoe. The LEDs function as a constant light source for shooting video, and when they’re not in use the panel serves as a bounce card for diffusing photographic flash.

ColorRight claims the LightRight will output 3000 lumens of illumination: almost as much as a 300W bulb. Using Samsung LED chips, the LightRight puts out light at 5600k (±200).

LightRight is less than half an inch thick and weighs about 13 ounces, meaning that, despite appearances, it shouldn’t be too unwieldy to use. 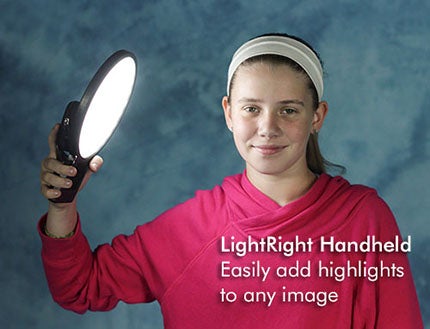 Image: The detachable LightRight lends itself to versatility, here providing a quick fill light for a portrait.

“LightRight LED products give people the ability to use their flash and a video light simultaneously. Our patent pending LEDNatural technology is a totally new approach to photo and video lighting,’ said Drew Strickland, President of ColorRight.

The LightRight is expected to be available from November 2013. There’s plenty of time left to support the IndieGogo campaign, which as of writing had made $10,000 of its $25,000 goal. To find out more about other ColorRight products, visit the ColorRight website.