Although there’s been plenty of camera news to come out of CES the undoubted stars of the show were tablets, much like Apple’s iPad. These touchscreen-based portable computers are now available based around the Android operating system – Google’s Answer to the iOS system Apple utilize on the iPhone and iPad.

The amount of hardware on offer at the show was thoroughly head spinning, with everyone from Samsung to Asus offering an option. Of course not all the releases were as note-worthy, or photography-linked, as others so What Digital Camera has compiled a brief roundup of the most significant tablets for the avid snapper.

Known for being the makers of an impressive range of Netbooks, Asus has released a family of tablets to satisfy the roaming web browser. The Slider is of particular interest as it offers a sliding keyboard, hence the name, and a 10.1 inch touchscreen. There are even two cameras, one facing forward at 5MP resolution and one at the user with 1.2MP resolution. The 16/32GB solid state drive should store plenty of images, although there’s only a microSD card slot for the direct plugin of memory cards.

The 10.1 inch-screened Xoom is an exciting prospect, with 2GHz of processing power locked under the hood (twice that of the iPad) as well as a barometer, gyroscope and numerous other orientation tools to insure the tablet knows where and how it’s being held. The two cameras are 5MP front facing, with 720p movie recording capabilities, and a 2MP camera facing the user. There’s also and SD card slot for the direct transference of images to the 32GB built in storage as well as 3G compatibility for uploading images via a phone network.

With dual functionality to either stand alone as a tablet PC or be connected to a keyboard dock to form a more traditional laptop hybrid the LePad looks to offer the best of both worlds. On it’s own the LePad offers a 1.3GHz processor and the Android 2.2 operating system, where as in the keyboard dock the processing power expands and Windows 7 becomes available. Only a 2MP front facing camera is available, rumored to have an LED flash, and a USB 2 slot to connect a card reader as well as a 32GB of Flash Memory. 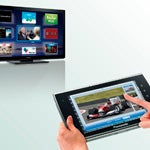 Very little is known about the Panasonic tablet, other than that it will provide extended control of the Viera televisions. The ability to display images connected to the TV is also offered, which should allow for SD cards or still cameras plugged in to be accessed. As Panasonic have a number of symbiotic features between the recording and display devices in their range we’re expecting more features to be announced shortly.

Ever since Google announced development on an operating system industry tongues have been wagging as to how Android will be best utilized, and if it would lead to a direct challenge to Microsoft’s PC-based OS empire. So far the only applications have been in smartphones and, most recently, tablets. The different versions offer levels of optimization for the tablet market, with 3.0 (or Honeycomb) looking far more like a traditional operating system for a full sized computer, rather than one modified from a Smartphone interface.

There will be hundreds of thousands of apps on offer via an app store, multi-tasking and 3D compatibility for the likes of interactive maps. The Motorola Xoom and Asus eee Slider both offer the new OS, with others expected to follow suit soon. The possibilities for photography uses, much like in the early days of the iPad, have yet to be fully explored, but with Samsung already announcing a compact capable of being controlled via Android we’re expecting more manufacturers to realize the potential soon.