Carnivals take place in many cities and although they can all be colourful and spectacular, together with their own characteristics, none can compete in sheer scale and numbers to the one that is held annually in Rio de Janeiro, Brazil.

For the photographer it is a riot of colour, spectacle and drama combined with stunning-looking participants whose energy is infused by the intoxicating music.

Forward Planning
Although it is all too easy to get carried away at an event like carnival, there is nothing like a little forward planning. For a start the first procession, or ‘school’ as they are called, begins at 10pm. The last one finishes around 6am! Apart from having the physical stamina to keep going, if you are shooting RAW, like I do, and only get around 40 shots on a 1GB card (this is the capacity I get on my new Canon EOS 1DS MK 2 which delivers 16.7MP), you will have to make provision for the downloading and storage of images. Over an eight-hour period and seven schools it is easy to get through the equivalent of ten 1GB cards! As a rule I download my cards into my laptop and then back-up on my 80GB Firelite pocket drive, which NEVER leaves me! Remember, a digital image does not exist until it is backed up at least once.

Use Natural Light
The next consideration is the lighting.
Remember, you are shooting at night and the carnival will be lit
artificially by floodlights and the illumination of the various floats.
Of course, you could use flash, but with such a large arena even the
most powerful unit will be pretty ineffective. The other point with
flash is that even if it does work it could kill the atmosphere. So
here I would only use it if I were closer in to my subject or using it
in a slow-sync mode. All the shots reproduced here were shot handheld
with the camera set to an ISO of 400 and the white balance set to
tungsten mode. 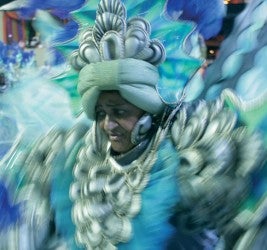 Choose a Vantage Point
I quickly realised that viewpoint was
going to be essential. We can all get carried away by the occasion and
think everything is wonderful but it rarely translates into a good
shot. It became apparent early on that the best shots were going to be
those taken close in or that could be taken from a higher viewpoint.
Moving to the edge of the procession meant that I could get the
close-in shots, while finding a higher viewpoint proved more difficult
but not impossible.

Avoid Camera Shake
As I did not have a tripod I improvised
by finding a wall that I could steady the camera on. This meant that I
could shoot at speeds as low as 1/4 second and with the camera
steady, the background remained sharp while the carnival dancers became
slightly blurred, creating a real sense of movement. Be careful not to
use too slow a shutter speed as the dancers could disappear altogether.
I checked the LCD to make sure that I had got just the right speed.