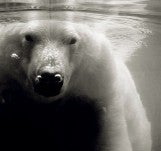 1 Take a walk on the wild side
Wildlife and non-domestic animals are usually photographed in colour, which is why going for the less-familiar black and white approach can pay dividends, as Anthony Previte has shown with this striking shot taken at Toledo Zoo:

‘I took the original picture soon after I got my Canon 350D,’ says Anthony. ‘I used a Tamron 18-200mm lens at 42mm, and shot at f/7.1 and ISO 800. The original was pretty unimpressive and had some bad reflections covering up parts of it. I put it in B&W because I thought it would really bring out the bear’s eyes against his white fur and the texture on his nose.’

2 Add a Sepia Tone
The term ‘black and white’ shouldn’t be taken literally. As the more correct term – monochrome – makes clear, it’s more about creating images based on varying tones of a single colour. That colour could be black (with its various grey shades) or you could add a tint. Warm tints such as sepia were popular in Victorian times and are popular now for their nostalgic qualities. Photoshop provides a range of methods for converting images to sepia, from using the program’s preset Sepia filter (Image > Adjustments > Photofilter), through to more complex split-toning techniques. 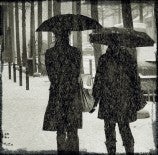 Louise LeGresley used a subtle sepia tint for this shot: ‘I was attracted to this scene as it was the first time I’d seen people with umbrellas in the snow. I used a Panasonic FZ5 at 1/100sec at f3.3. I applied the b&w conversion in Photoshop. I then continued in Photo Filter where I applied a sepia tint that was quite strong, so I desaturated it a bit.’

3 Shoot Infrared
You can get some ethereal, other-worldly effects by using the infrared part of the spectrum to record your image. It’s normally invisible so you’ll need to fit a filter (ideally a Hoya R72, or a deep red filter) to exclude most of the visible spectrum so that only the infrared part reaches the sensor. The results show a world of strange tones, of dark skies and cotton-white foliage. Some cameras have a filter over the sensor which cuts out infrared, making them less than ideal, but many owners of these cameras have reported that infrared photography is still possible, albeit at long exposures. An alternative is to buy a camera specifically for infrared and have this filter removed by a technician. Compacts are often used for this due to their lower purchase cost. For more advice on shooting infrared with specific cameras, visit: http://www.flickr.com/search/groups/?q=infrared 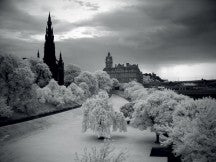 Dave Wild says: ‘This was taken on the bridge overlooking Princes Street gardens in Edinburgh at 9:15am after some rain, so it was unusually empty. The photo was taken using a Canon Digital IXUS 55 with a Hoya R72 filter attached to the camera using a third-party device that screws into the tripod thread.’

Dave’s technique: Using the R72
‘Because of the limitations of the IXUS and the way I attach the R72 filter, it means exposures are chosen based on previous experience. Given the current lighting situation this was a six-second exposure. The screen preview is quite a good guide but I normally take a few shots with slightly different exposure times if I have any doubt.’ 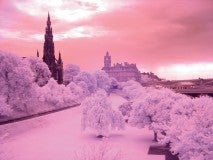 Desaturate and set white point
‘The white balance is also hard to get right using this setup so I typically set it to a fixed factory setting (tungsten, but it could be anything), and my shots then tend to come out a nice, uniform shade of purple. Post-processing consists of de-saturating the image and adjusting the white point using curves.’